Future is feeling a little nostalgic while in quarantine.

Three years ago, JAY-Z took shots at rappers holding money to their ears, and Future was one of those who clapped back. In 2020, the Freebandz rapper is still holding up his money phone while flexing on Instagram with his pal, Young Thug. Perhaps one of the worst consequences of the coronavirus pandemic is that we are separated from our loved ones. Social distancing has been one of the key recommendations to avoid infecting oneself and others, but it definitely doesn’t help with feeling lonely.

It appears that Future was taking a trip down memory lane as he shared a photo on IG that was taken in happier times. That snap featured the “Life Is Good” rapper sitting alongside his Atlanta homeboy, Young Thug. The pair are looking fly as they sit in Future’s whip, and the 36-year-old holds a stack of bills to his ear.

“TWINS …big rings on the chain and multiple bracelets on the arm,” Futch penned as the caption. “Leaving ah private island in Dubai wit 5m’s n jewelry whole lotta cash staying at the Versace hotel then swap it out went to the Armani hotel rewriting history in the back of a rolls Royce talking facts and jus a glimpse of our time there still going viral since 2017… SURFERS.” 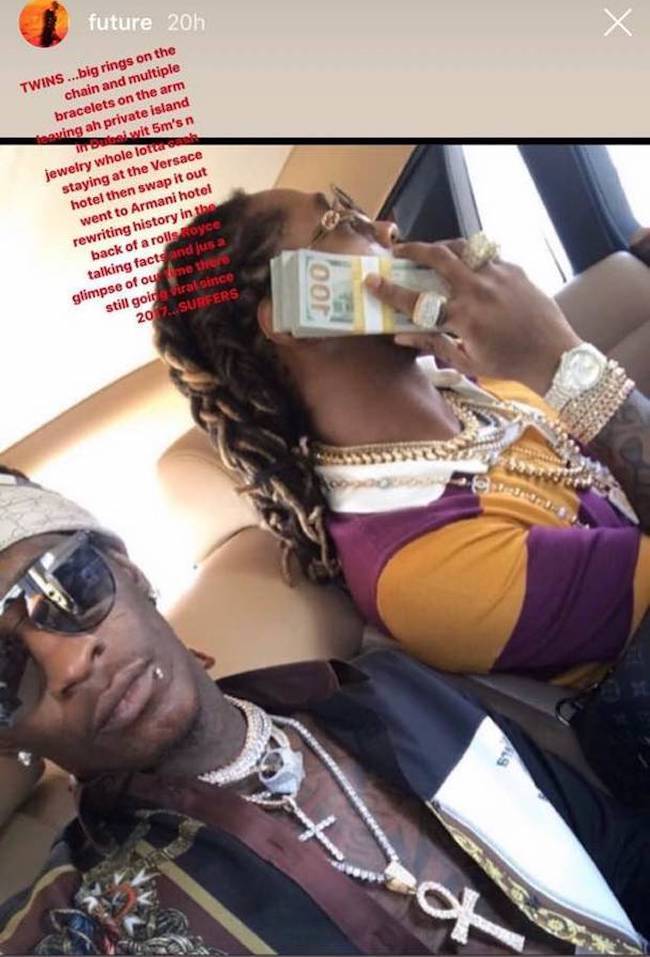 The picture was taken during simpler times, back when Future had far less baby mamas. In fact, it was the day he said, “You identify my b****es with APs. If she ain’t got a AP, she is not mine! She belongs to the streets.” These days, he is fighting a legal battle against Eliza Seraphin, who alleges he fathered her daughter Reign.

Future also came to an out-of-court settlement with a woman named Cindy Parker, who claimed he was her son’s baby daddy. For a while over the weekend, fans even assumed that he had gotten his current girlfriend, Lori Harvey, knocked up as a sonogram was spotted during her Insta Live feed. In the end, the pregnancy pic was attributed to her expecting sister, meaning that she ain’t one of Future’s baby mamas. At least for now.