Vybz Kartel found himself in serious trouble after correctional officers searched his prison cell and uncovered a cellphone, which is a banned item.

Vybz Kartel fans are running to his defense as authorities launched an investigation following news that he was live on Instagram. It’s no surprise that “Kartel” was trending on Twitter all of last night. What else would you expect after the incarcerated deejay made history when he became the first dancehall deejay ever to go live from prison – allegedly. Fans have been buzzing about the moment that has now triggered authorities to conduct a search of the deejay’s prison cell.

According to Nationwide, retired Commissioner of Corrections, Lieutenant Colonel Gary Rowe, says an investigation was rolled out after it was “being alleged by some social media users that Kartel went live on Instagram last night.” They reportedly discovered a phone in the deejay’s cell, along with two more from other inmates.

“The Department of Correctional Services (DCS) is investigating reports that an inmate was involved in a live stream on a popular social media platform,” a statement from the Office of the Director of Public Affairs & Communication, reads. “A search of the inmates cell and adjoining cells have been carried out by the DCS Search Team from the Caribbean Search Centre and the contraband found and removed.”

Vybz Kartel and the other two inmates are now facing sanctions for having a banned item in their prison cells. Sanctions could involve solitary confinement, as well as certain privileges revoked, including family visits and recreational times. “Sanction for inmates responsible is pending. The department wishes to advise that these actions are taken seriously and efforts are being made to limit a reoccurrence of this nature,” the DPP office said in the statement. 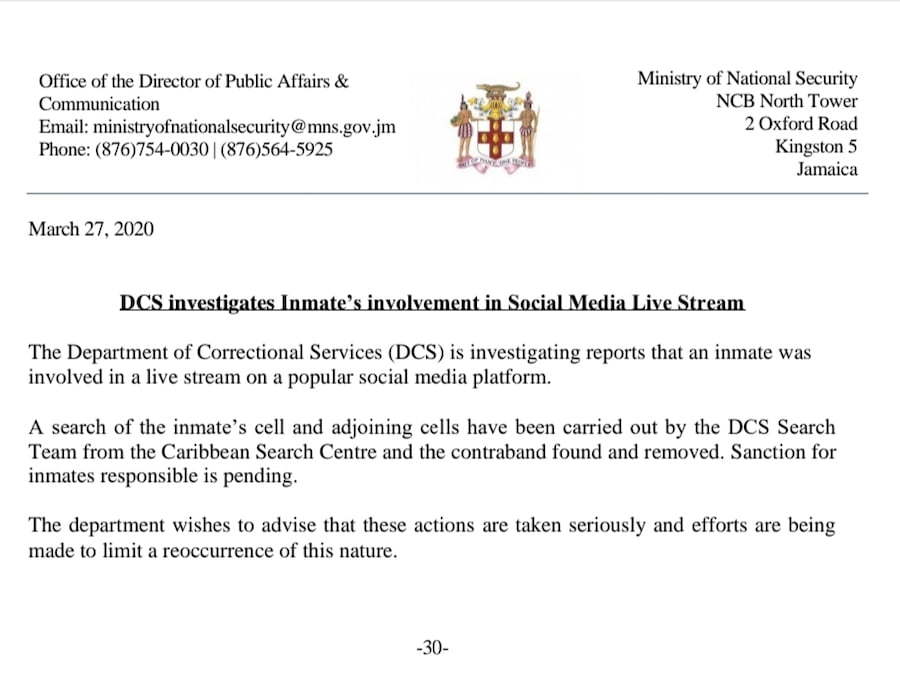 While Gaza fans were nothing but blissful about the special surprise guest appearance on Rvssian’s live, not too cognizant of the consequences, they have now all flocked to Kartel’s corner as they’ve become aware of the legal implications that may stem from it. The Gazanation is now arguing “No face, no case” as the dancehall star made the smart decision to not reveal any physical features throughout the short interaction.

It could easily be argued that this was not, in fact, Vybz Kartel, and rather an audio clip of the deejay being played over a dark background. Fans have recognized this and have taken to social media to defend Kartel’s case. “Uno see the man pon nuh live?” one fan asked a news source reporting on the spectacle. “I was on the live and I didn’t saw kartel so that’s BS,” another asserted. “I hear it was recording. We haven’t seen his face in any of the videos,” another Gaza fan told reporters on Twitter.

Addi’s Twitter lawyer/fan summed it up in one post stating, “My client is not guilty of anything that you guys are trying to impose, where is the proof that he was on live,” she continued. “I am aware that such and such video is going around on social media, but let me ask the question, did you see Vybz Kartel face in the ‘live video’?” she argued.

If it were up to the fans to confirm what’s alleged, the prosecution would fail to make a case. There is no doubt that they would lack witnesses if they were looking to the Gazanation to implicate the Gaza Boss. Do you think the case is a dead end?