Drake’s OVO is suing Australian brand Bellroy X Clae for modifying their logo to resemble theirs.

The OVO brand is pretty prominent in the fashion industry because of Drake’s affiliation. The brand owner and founder often don outfits from the apparel house himself, which makes the brand and its associated logo that much more popular. According to TMZ, OVO has drawn up a lawsuit against Bellroy X Clae in which they accuse the brand of basically stealing their logo. The famous OVO owl was clearly mimicked in Bellroy’s rebranded logo. OVO stated in court documents that Bellroy “changed the design of the owl by altering its posture, width, wings and feet in order to blatantly mimic the OVO owl.”

Not only did their logo get a new look, but the brand attached it to clothing and shoes, which is what the OVO brand is known for. Bellroy X Clae originally offered products like small luggage, phone cases, and wallets. Now with the addition of apparel and footwear, OVO is concerned that Bellroy seeks to mislead the public into believing that they are affiliated with its brand. 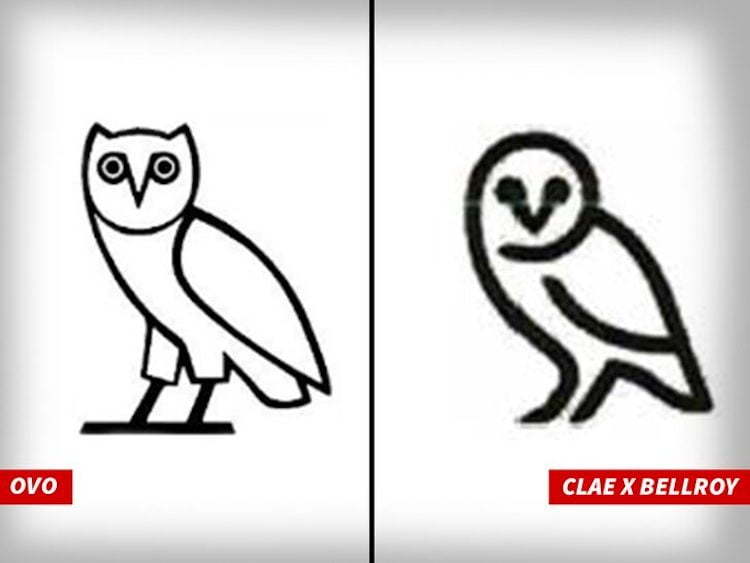 Drake’s brand is now suing for trademark infringement. They have also asked the court for a cease and desist order to deter the brand from continuing to maximize its perceived association to OVO. They went even further to ask for compensation for damages as well as any profits the Australian brand has generated since they have turned their logo into the OVO owl’s likeness.

OVO recently collaborated with Clark’s Originals for an exclusive limited-edition assortment of Wallabees. Even besides Drake’s name initially carrying the brand, it has made a name for itself in the industry and is continuing to make strides in its development. It’s no wonder they were quick to sue when another company seemingly sought to gain from it.