Young Thug went from supporting Dwyane Wade’s transgender daughter to getting canceled for his “transphobic” tweet.

Young Thug is one of few rappers who appears to be voicing their support for Dwyane Wade and his transgender daughter Zaya, who has been dominating the headlines this week after the NBA legend went public. On Tuesday, Boosie Badazz posted a video of himself on IG ranting about Wade’s decision to allow his son to become a woman. The Baton Rouge rapper received some heavy backlash for it, even though there are still some folks who agree with his argument.

“All I wanna say to dwade son is ‘GOD DONT MAKE MISTAKES’ but hey live your true self,” Thugger tweeted. While it’s very clear that his true intentions of the tweet were genuine, he made one mistake that ultimately put him on the cancel list. That mistake is referring to Zaya as Dwyane Wade’s “son.” 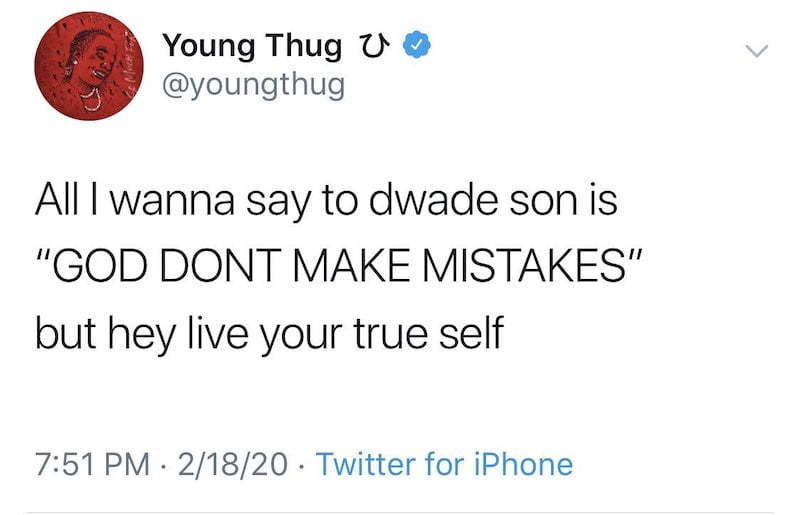 In the era of the cancel culture, that mistake is proving to be a real bother for Young Thug, who has since deleted the tweet. Thugger has not yet responded to the backlash, and I doubt that he will, given the flood of tweets. Still, his true intentions must not be overshadowed. It might appear that Thug was showing support for 12-year-old Zaya and her dad, who’ve been met with strong criticisms from some quarters of the celebrity world. But then some fans read his tweet as transphobic, a rejection of his decision to become a transgender woman. The Game’s manager, Wack 100, also voiced his support for what Boosie said on IG.

Here are some of the tweets.

Me, a thugger ride or die: pic.twitter.com/uVNCaUOjmb

When I see a “thugger is cancelled” tweet pic.twitter.com/2V7SAd72wU

Everybody that’s saying Thugger is cancelled, I got something for y’all pic.twitter.com/h6nkXKSNA9