Vybz Kartel has launched another broadside against Jamaica’s Children’s Advocate Diahann Gordon Harrison, for insinuating that he was somehow culpable for juvenile delinquency amongst many of the island’s youth.

The World Boss, in a no-holds-barred post, also slammed politicians, dons, and irresponsible parents in his second tirade since the State official indicated in late January. She pointed out that a study conducted by her department among children who were either charged or accused formally of having committed criminal offenses had revealed that he, Vybz Kartel, was their “undisputed role model.”

“Miss obviously in it to win it. While you’re fooling some dunce head ppl with tis ‘concerned child advocate’ facade… let me tell you somn. I”ve been in (location loading…9 years now and guess who takes care of my kids? Me! And their mothers; not child advocates, not entertainers, and certainly not the corrupt neocolonial system that you are a part of; Me!& their mothers and I wouldn’t want it any other way cause that’s what real men and their babymothers do. Plus my kids are a handfulso I can’t help you raise ‘waste man’ and ‘waste gyal’ pickney. That’s not my job,” Kartel said in the post. 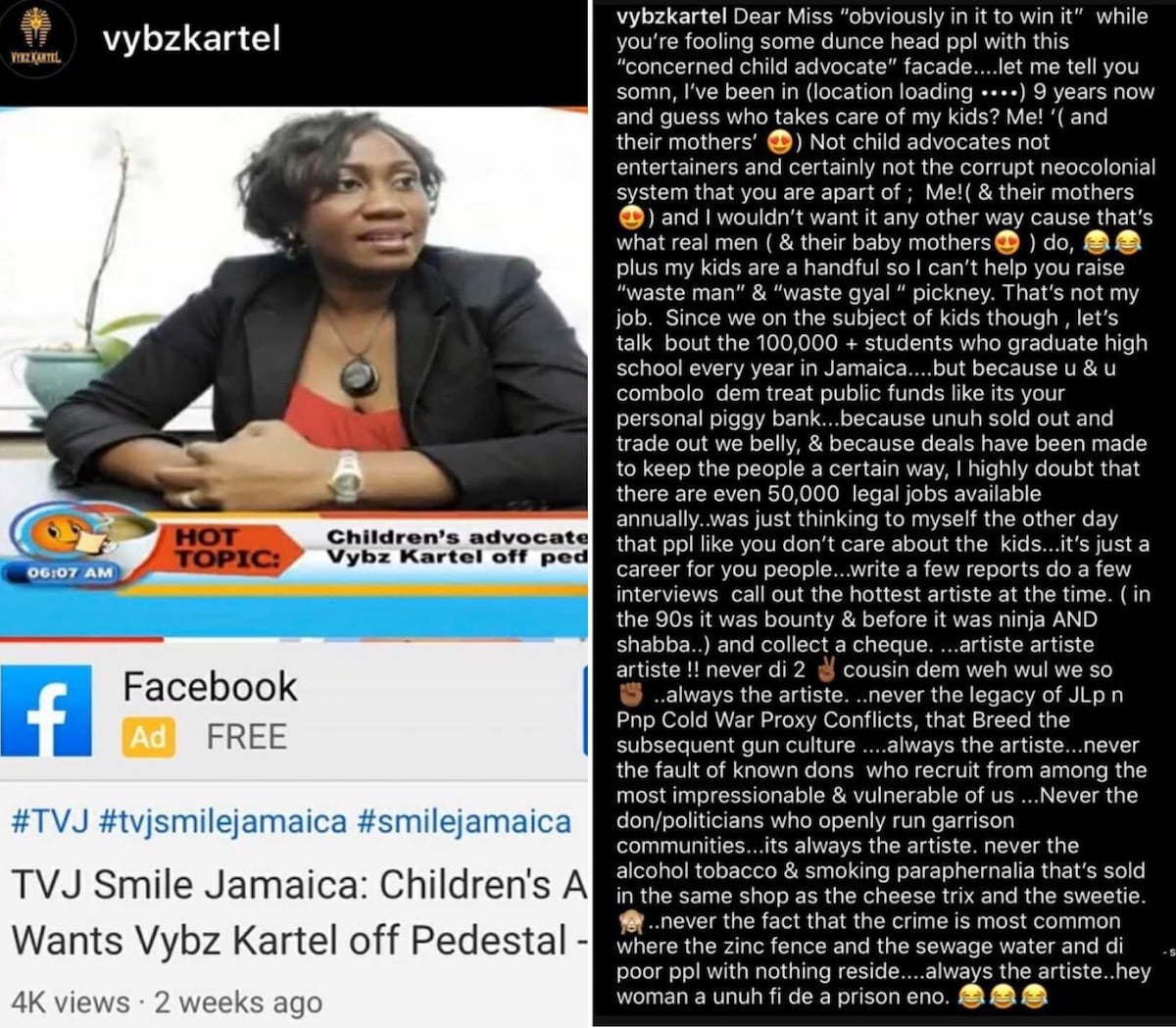 It was obvious that Vybz Kartel was still seething about the Children’s Advocate’s statements about his character, as he dug deeper into other problems that have perennially affected Jamaica, chief among them corruption by State officials and under-education, which he said was being ignored by her.

“Since we on the subject of kids though, let’s talk about the 100,000+ students who graduate high school every year in Jamaica. Because u & u combolo dem treat public funds like its your personal piggy bank… because oonu sold out and trade out we belly, & because deals have been made to keep the people a certain way, I highly doubt that there are even 50,000 legal jobs available,” he declared.

Kartel said officials such as the Children’s Advocate and her colleagues were the main part of Jamaica’s problem, as most of them had only accepted the positions which they hold, just to collect a salary.

“Was just thinking to myself the other day that ppl like you don’t care about the kids… its just a career for you people… write a few reports to do a interviews, call out the hottest artiste name at the time (in the 90s it was Bounty and before it was Ninja and Shabba) and collect a cheque.,” he said.

He also reiterated his previous arguments that artistes were being scapegoated for the misdeeds of dons and politicians and the incompetence of State officials who do not care about problem-solving. He also pinpointed substandard physical living conditions as among the root causes of the crime problem, which was not being paid attention by the powers that be.

“Artiste artiste artiste!! never di two cousin dem weh wul we so….always the artiste…never the legacy of JLP n PNP Cold War Proxy Conflicts that breed the subsequent gun culture… always the artiste; never the fault of known dons who recruit from among the most impressionable and vulnerable of us…Never the don/politicians who openly run garrison communities… its always the artiste. never the alcohol tobacco and smoking paraphernalia that’s sold in the same shop as the cheese trix and the sweetie,” he argued.

“Never the fact that the crime is most common where the zinc fence and the sewage water and di poor ppl with nothing reside…always the artiste.. hey woman unuh fi de a prison eno,” he noted as he ended his arguments with some laughing emojis.