It can’t just be us who are getting tired of this French Montana vs. 50 Cent feud?

It’s been over a month now that the two rappers have been at each other’s metaphorical throats, but things got physical recently when 50 Cent and French Montana were at the same club over the weekend in Miami. The drama went down and lots of it. The “In Da Club” rapper allegedly threw some punches outside — some of which landed on French’s face, though the Moroccan native denies it.

“YOU TOO OLD FOR THAT, FIRST YOU PAY FOR YOUR STAR MAN I WISH I WOULD HAVE SEEN YOUR STUPID ASS LAST NIGHT, WENT TO YOUR CLUB WHERE YOU WAS HOSTING, YOU LEFT BEFORE I GOT THERE TELL PEOPLE THE TRUTH DINOSAUR!!” the “Out of Your Mind” rapper wrote in response to a video of the incident that has been floating around the net. 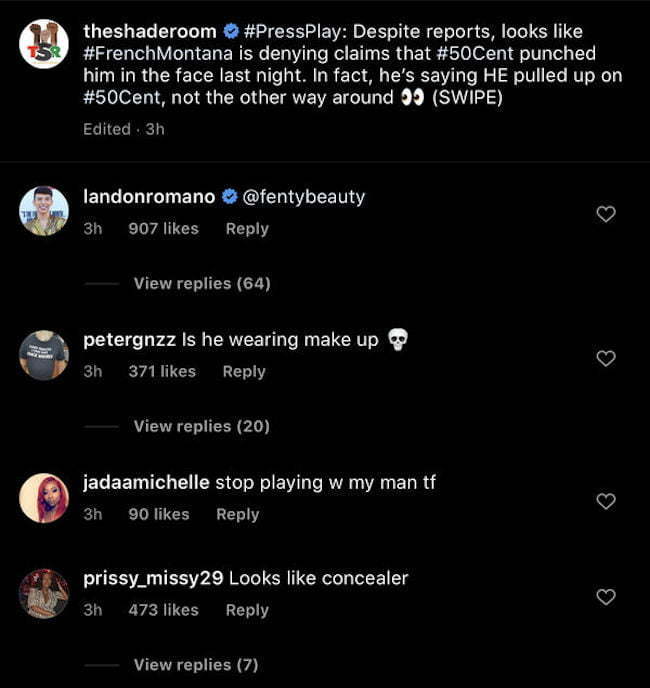 “FIRST IT WAS DREAM CHASERS I SAW MEEK WE LAUGHED ABOUT IT NOW THIS !! YOU A RAT AND IF YOU WATCH YOUR VIDEO, YOUR PEOPLE WENT TO THE COPS AT THE END AT YOUR PARTY THAT I CAME TO TO FIND U AND U RAN!! LOL STOP CALLING BLOGS IM THE TRUTH NEVER BEEN TOUCHED.”

In spite of French Montana claiming that his visage remains unscathed, fans now believe otherwise. That’s all down to the video, which he posted that shows him donning a hoodie and, according to some, just enough makeup to cover some bruises. Whether French is spending his spare time watching make-up tutorials and fancied trying out a new look with some blending practice, we don’t know, but his skin does look rather matte and blemish-free in the clip. One IG user even threw enough shade to tag Rihanna’s makeup range, Fenty Beauty, on the post.

We do have to say, if the Coke Boy Records founder DID apply concealer, he’s got some great beat skills of a different kind. Seems 50 Cent did a number on French Montana face and he hide it with makeup, at least that’s what fans think.