Trippie Redd comes through with a response to Eminem’s lyrics suggesting that he’s a drug addict.

Eminem may be showing fans a softer side in his latest surprise album, Music To Be Murder By. Compared to Eminem’s 2018 album, Kamikaze, the project seemed far less confrontational. Perhaps the lyricist was practicing self-restraint. However, “Zen” Shady may have appeared there were just some things he still needed to get off his chest—and as a result, artists like Machine Gun Kelly, Joe Budden, and Trippie Redd were all called out on the album.

While Eminem doesn’t completely diss Trippie Redd, he does use his name in reference to taking illicit drugs, which ultimately isn’t a compliment. On the track, “March,” Shady name-drops the Ohio-rapper. “Then he said kill MCs/Trippie Redd, with pills and lean/Sipping meds in the limousine/Getting head, guillotine,” Em spits. 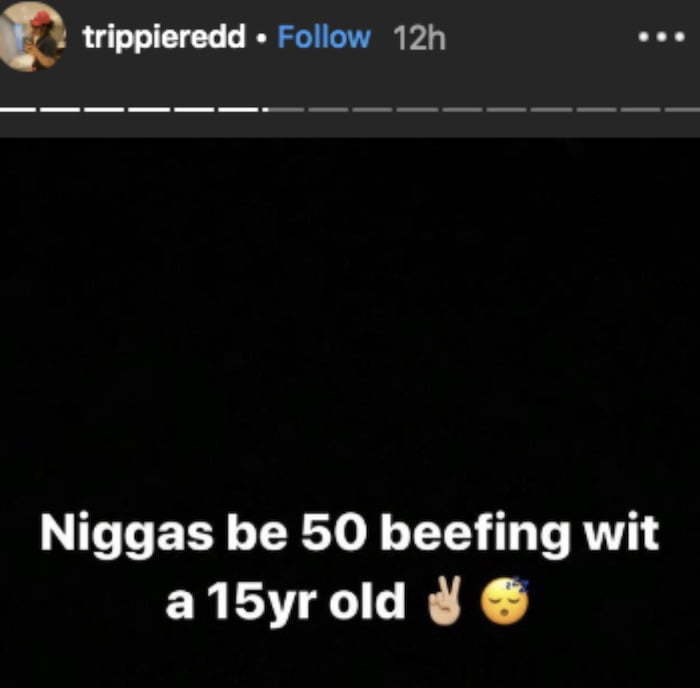 Now, Trippie is finally responding to the mention via Instagram. He took to his IG story to write this message for the Shady Records creator: “N****s be 50 beefing wit a 15yr old.” His sentiment was followed by a peace sign emoji and sleepy face emoji, indicating Trippie isn’t here for any rap beef.

Budden also responded to Em calling him, “Traitor Joe,” during his “Lock It Up” track.

Budden jokingly said the reference was “hurtful” and “offensive,” but ultimately concluded he had no more desire to beef with a person he no longer was angered by. “We had our exchange. It’s over. In 2020, I can’t harbor negativity not only towards one of the best rappers, but somebody I’m not angry at. That’s what I gotta stop doin’. I don’t be mad at the people I come in and kill. There’s no hostility after that.”

During a recent interview on Math Hoffa, Joe was asked about the possibility of him and his other Slaughterhouse brothers (Joell Ortiz, Kxng Crooked, and Royce da 5’9”) reuniting for a project. Despite Budden’s peaceful reproach, he confirmed that he would not be putting anything else out with Slaughterhouse until Eminem’s label is out of the picture.