Lauren London reflects on the year that changed her life forever, 2019 when Nipsey Hussle was gunned down.

As 2019 comes to an end, many are reflecting on their lives over the last year. One celebrity who had a particularly rough year is Lauren London who sadly lost the father of her young son and love of her life in March of this year. Nipsey Hussle tragically lost his life to gun violence on March 31, 2019. The Los Angeles rapper was at his Marathon Clothing store in the Hyde Park are of South Los Angeles when the gunman opened fire on him in the parking lot.

Many showed out for the departed rapper’s funeral which was highly publicized. Celenrities and fans alike have been remembering Nipsey Hussle all year with some calling him a legend. Today, Lauren London took to Instagram to share a short statement. “2019 changed the rest of my Life,” Lauren wrote on her Instagram story. 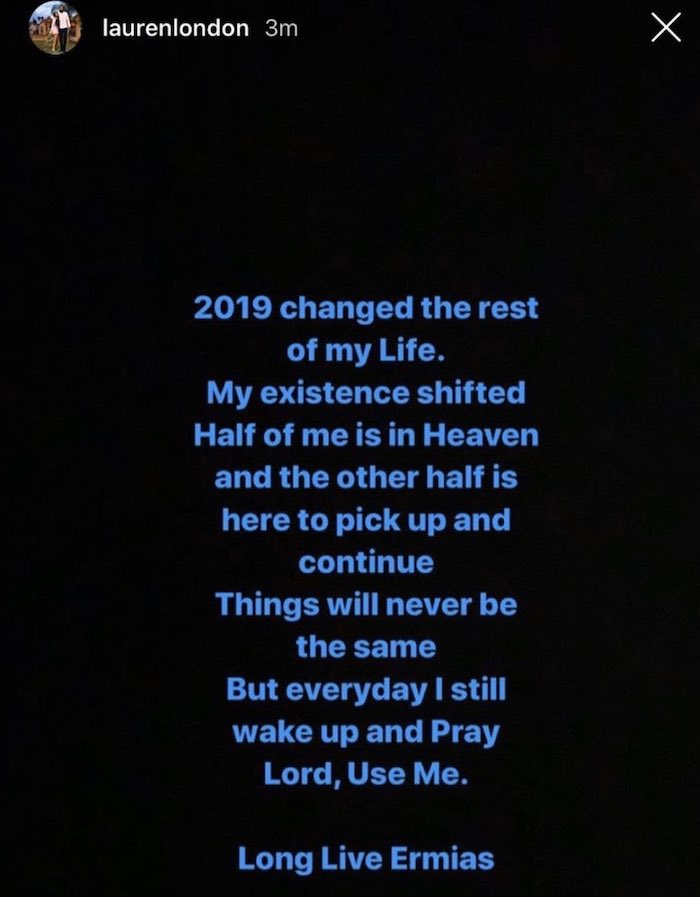 “My existence shifted. Half of me is in Heaven and the other half is here to pick up and continue. Things will never be the same but everyday I still wake up and Pray Lord, Use Me. Long Live Ermias,” she said.

Lauren London and Nipsey Hussle share a son together, 3-year-old Kross Asghedom. Now that she is a single mother, she is still adapting to the new family dynamic and life without her other half. It was recently announced that Lauren has partnered with Puma for a project called Puma x Lauren London “Forever Stronger” which is supposed to honor the late Nipsey Hussle.

Our hearts go out to Lauren London and family at this particularly sensitive time of year.