Tekashi 6ix9ine baby mama was clearly rooting for him to go to prison.

By now, you would’ve already known that 6ix9ine, whose real name is Daniel Hernandez, was sentenced to 24 months in prison and 5 years of supervised visits. It’s no secret that Tekashi 6ix9ine and the mother of his daughter, Sara Molina, have a mutual disdain for each other the past year and some more. The pair split last year amidst allegations of cheating on both sides. In his letter to the judge ahead of his sentencing, 69 again accused Sara of having a sexual relationship with a member of the Nine Trey Bloods gang, who happens to be his former manager, Kifano “Shotti” Jordan.

Shortly after the judge handed down his sentence on Wednesday, Sara took to her Instagram Live to share her thoughts, and it’s pretty clear that she is in celebratory mode despite some push back from some of his fans who are saying Tekashi is still the father of her child. 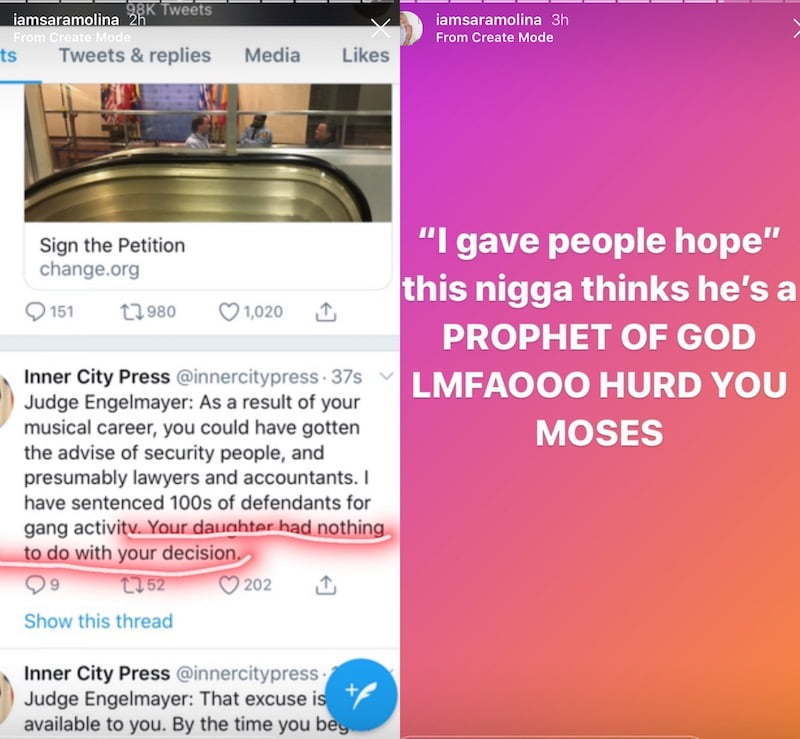 “I gave people hope’ this ni**a thinks he’s a PROPHET OF GOD LMFAOOO HURD YOU MOSES,” Sara wrote while mocking 69’s statement in court. She also pointed out a statement the judge made during the sentencing hearing, where he made mention of his the rapper’s daughter having nothing to do with his crimes.

From the looks of it, Tekashi 6ix9ine has already served a little over half of his 2-year sentence, and will likely be released late next year. The rainbow-haired rapper was hoping that the judge would sentence him to time served and set him free today, but that was not the case. The presiding judge made it clear that his crimes are too serious for him to just served 13 months, which is not enough.

Sara Molina is clearly satisfied with the sentencing, although she might’ve wanted a harsher punishment.