50 Cent is kind of late with dragging Tank for his recent sexual comments on Lip Service with Angela Yee but that doesn’t mean his trolling is any less newsworthy.

Tank is currently promoting his new R&B album “Elevation,” which he has been mentioning in several interviews during his press run. You might remember recently in one of those interviews when he made some controversial remarks about what makes a man gay. During a conversation with Angela and the gang on her talk show, Tank tried to justify why lying once or twice does not make someone a liar. He went on to use the argument in the case of a cheater and a man experimenting with same-sex partners. Basically, Tank’s statements suggested that if a man tries sexual acts with another man and decides it’s not for him, that man is not gay. This stance was widely disputed for a while, but 50 Cent appears to only be catching on now. 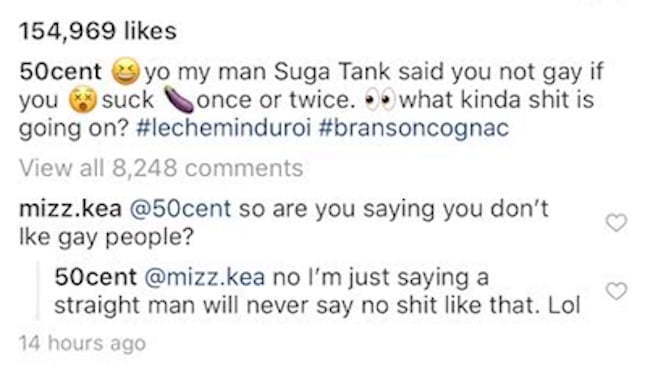 In an Instagram post that showcased Tank wearing a tight, pink “Pride” hoodie, Fifty wrote, “yo my man Suga Tank said you not gay if you s**k [insert eggplant emoji here] once or twice. what kinda sh*t is going on?” A seemingly unbothered Tank laughed at the post to which he responded, “Make sure you get the #1 R&B album in the world “Elevation”! @50cent if you play my album you won’t have to buy yo girl sh*t to f**k. Let me help you..”

While most people focused on Tank’s hilarious comeback in the comments, the context quickly shifted when a fan queried if 50 Cent is implying that he doesn’t like gay people. His prompt response was, “no I’m just saying a straight man would never say no sh*t like that. Lol.”

Fifty has made his thoughts on Tank’s sexuality pretty clear. Do you agree that a heterosexual man would not share the R&B singer’s views?