Tensions are running at an all-time high in dancehall lately, with everyone formulating their own beefs and picking sides in others. Every other day is a new diss track taking hits at each other’s family members. Now Masicka‘s manager, Corey Todd allegedly wants a piece of the beef and is attempting to stir up trouble with Vybz Kartel. However, Kartel’s fans quickly squashed any hopes of that. Vybz Kartel will always be the undisputed King of the Dancehall.

Corey Todd allegedly went on a rant, stating that the Genahsyde deejay could take the King of Dancehall crown from Vybz Kartel.

“Hope them free him so @masickamusic can take the crown this the lyrical war people need everything else a joke. I don’t care what people say my contribution towards the current King is undeniable no matter how many people want to act like I didn’t change dancehall or help him to a next level. But guess what I told all of Jamaica a new king would rise so please free him and get your popcorn ready cause I hope him ready and we not wait for 2020”

He then makes it known that they’re ready and waiting to launch a full assault on the Worl’Boss at any moments notice. “If them free him tomo we bring the war to him footstep a him call for it,” Todd said. “FYI we never begged or asked him for a song or paid him and all idiots out there who think infrared buss Masicka u are sadly mistaken this tweet he sent was way before that song Masicka wave was there real and undeniable so who was the real wave rider.” 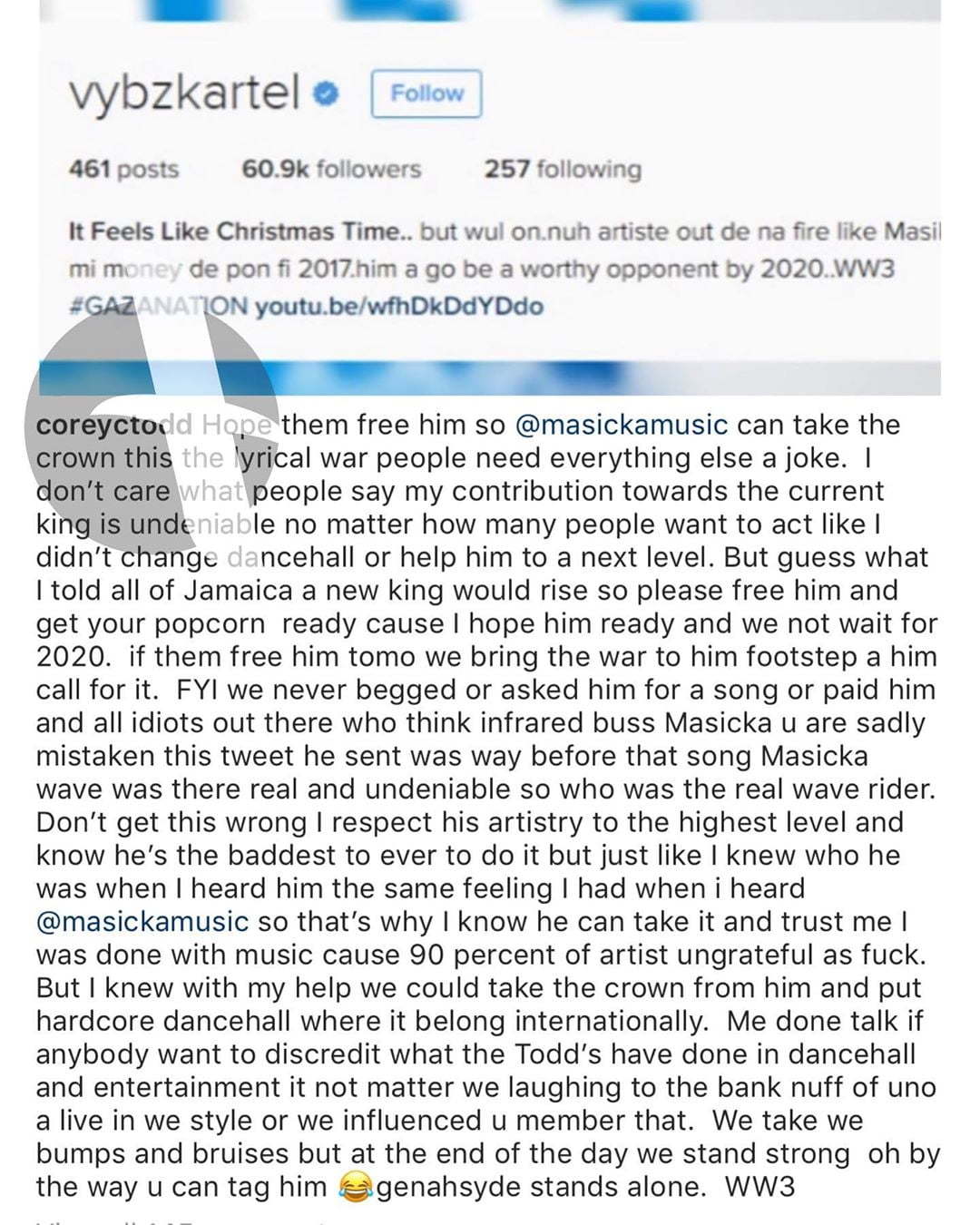 He then goes on to give Kartel his credit while stating that Masicka is comparable to the incarcerated deejay. “I knew with my help we could take the crown from him and put hardcore dancehall where it belong internationally,” Todd continues.

The manager then boldly states, “Me done talk if anybody want to discredit what the Todd’s, have done in dancehall and entertainment it not matter we laughing to the bank nuff of uno a live in we style or we influenced u member that. We take we bumps and bruises but at the end of the day we stand strong oh by the way u can tag him Genahsyde stands alone. WW3”

Soon after the rant was posted, Vybz Kartel’s fans quickly came to his defense. One fan commenting, “Corey Todd clearly a look somebody to see him, as much as I am not a fan of dancehall anymore, Vybz KARTEL is unmatched and undefeated, we all know “infared” didn’t buss masicka, “guhh fi anything me wah “buss him but it wasn’t a hit like “infared” right now if KARTEL was to be freed all these wanna be entertainers would be cancelled, the man is not only saturated with lyrical prose, the man has versatility locked, performance locked and the has a high influence on the youths; nobody is taking away greatness from masicka but why make a comparison when there is none??? ”

She then goes on to add, “Just because you and KARTEL didn’t part ways amicably doesn’t mean you have to brew up controversy, even when incarcerated, the man music is still traveling, people need to understand; it wasn’t image that buss KARTEL, it was raw unfiltered talent. When you can truly connect with people; there’s no one to take his place that I’ve seen. G.O.A.T.”

Her sentiments are mirrored throughout the comment section with fans stating that Masicka would never stand a chance against the legendary prolific lyricist, Vybz Kartel.

The message appears to be a leaked message so take it with a grain of salt.