The South Florida rapper don’t want you to sign any petitions for him to be released from behind bars because faith in God is getting him through. Kodak Black, whose real name is Bill Capri, has been behind bars for the past several weeks following his arrest at Rolling Loud in Miami on suspicions of illegally buying firearms. His fans have been petitioning authorities for his release from jail, but he is now asking them to stop.

Kodak gave his fans an update yesterday on his state of mind while incarcerated. “Thanks everybody but ion [sic] need Y’all signing petition for me, God got me I’m ight,” he wrote in a post on IG. 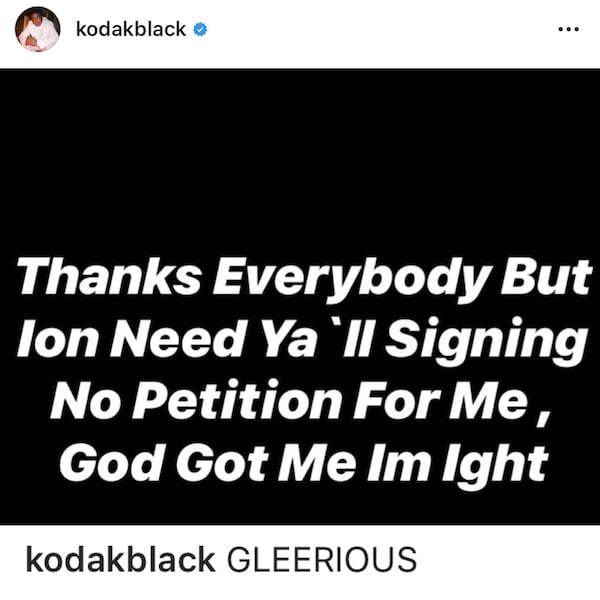 Some of his fans are saying that they didn’t sign any petitions to begin with because he is rich enough to be able to afford some of the best lawyers in the country. “I never signed that petition any way because this ni**a is rich enough to get himself any good lawyer, so petition is useless to him, we need to petition for those poor kids getting locked up for smoking a blunt,” one fan wrote.

Kodak Black was denied bond after prosecutors argued in court earlier this month that he is a danger to the community. His lawyer shot back, saying that he was arrested for a non-violent crime, allegedly falsifying paperwork, so he can’t be a danger to anyone. The judge ultimately sided with the government and denied him bond.

Young Kodak was extra generous recently when he gifted XXXTentacion’s son $50,000 cash. The “Tunnel Vision” rapper made good on his promise to help X’s mom support the toddler and even while he is behind bars, he had his people delivered the cash. Perhaps the fan was right, he is rich enough to get himself a good lawyer.