Cardi B doesn’t play when it comes to her man.

One female fan suggested to Cardi B that Offset is off cheating on her again, and she had the most savage of all clap backs for the said fan. It’s no secret that the couple has had their ups and downs over the past two years and came close to getting a divorce back in December last year she abruptly announced on the Gram that she is getting a divorce. Somehow they managed to work out their differences and are now on good terms.

If you’re one of Cardi B’s followers on Instagram, then you would’ve known that she is unfiltered about any and everything when she speaks. Recently she ranted about people telling her what she can and can’t post on the Gram while saying that she will be going back to her old regular self. She made good on that promise when posted a photo of Offset with which she captioned, “Lick you the f*** up Ugh I miss you.” 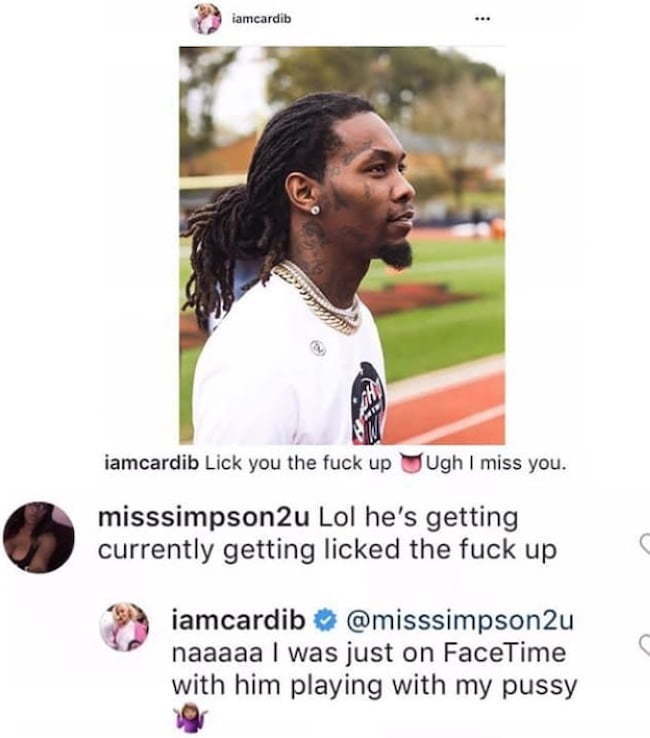 One female fan decided to comment on her post saying, “Lol he’s getting currently getting licked the f*** up.” Cardi B wasted no time responding to the fan. “Naaaa I was just on FaceTime with him playing with my pu**y.”

Don’t come for Cardi B if she didn’t send for you or else you will get your feelings hurt. Aside from keeping trolls on their toes on the Gram, Cardi B is currently working on new music. Last week she and Offset dropped off their new music video, “Clout.”