It’s not very often we see Chris Brown speaking on these issues affecting the hip-hop community. These days, Breezy is much more focused on raising his daughter Royalty, growing his Black Pyramid clothing brand, and making good music. Last week we saw YBN Almighty Jay viciously attacked in New York leaving him with a huge gash on his face that required 300 stitches. Cops arrested his attackers on Wednesday for a separate incident and charged four of them with attempted murder and gun possession.

In a message posted on his Instagram Story, Chris Brown shared his thoughts, something that he says has been weighing heavy on his heart lately. “I REALLY WOULD LOVE TO SEE THIS BLACK YOUTH UNDERSTAND THE CAPABILITIES in compassion, empathy, love, RESPECT, humility, laughter, selflessness,” Breezy wrote. “(INTELLIGENCE) WE BARELY HAVE ANY ETHNIC LEADERS THAT Appeal TO THE CULTURE OF CHANGING OUR PERCEPTION OF WHAT WE THINK THIS LIFE EXPERIENCE IS. GANGS STRUCTURES SHOULD DO WHAT THEY ORIGINATED FOR…. protect the people and citizens within these communities who are so decensitized by shock, PAIN, and emptiness!!!!” 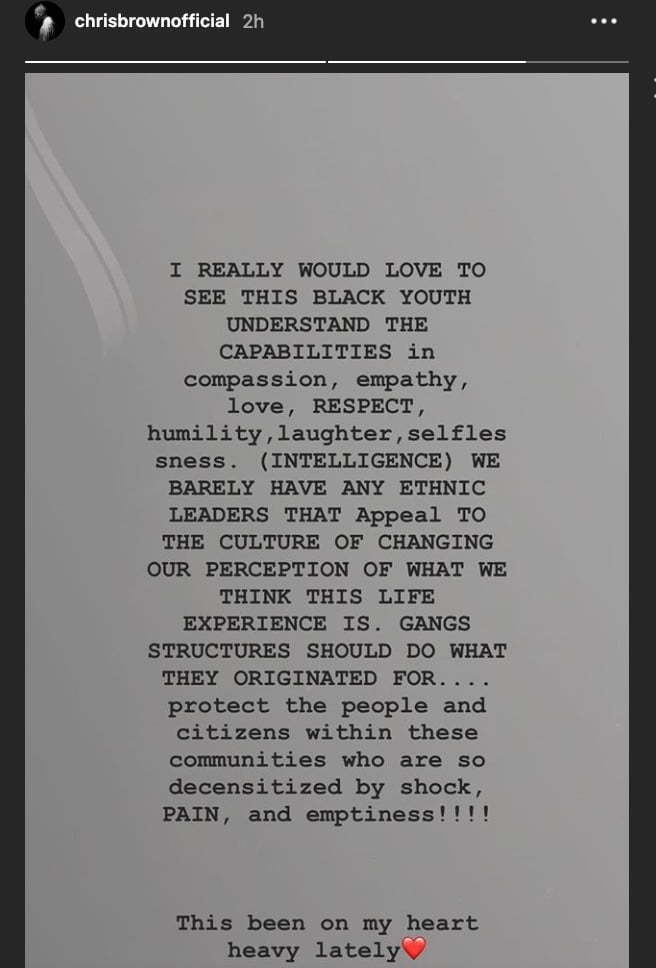 While Chris Brown didn’t mentioned YBN Almighty Jay by name, the rapper’s beat down and robbery gripped the entire hip-hop community this week. A lot of artists have been weighing in on the unfortunate incident.