Rihanna has dismissed rumors that he upcoming dancehall album is finished.

Reports surfaced online on Friday claiming that Rihanna‘s highly anticipated ninth studio album is done. Turns out that is not the case, and someone is just pushing some false hope for her fans. The Bajan pop star responded to the rumors on Instagram saying, “It ain’t done til it’s done sis.” She was responding to a story posted by one of her fan pages on the Gram.

Just this week, RiRi marked the third anniversary of her last album ANTI, which has since been certified platinum and spawned some mega-hits like “Work” and “BBHMM.” Rihanna has been working on her new album, code name R9, for the past year or more. Last year, Urban Islandz reported that she would be doing a full dancehall album, and now we’re hearing that it could be a double-disc project with half dancehall and half R&B. 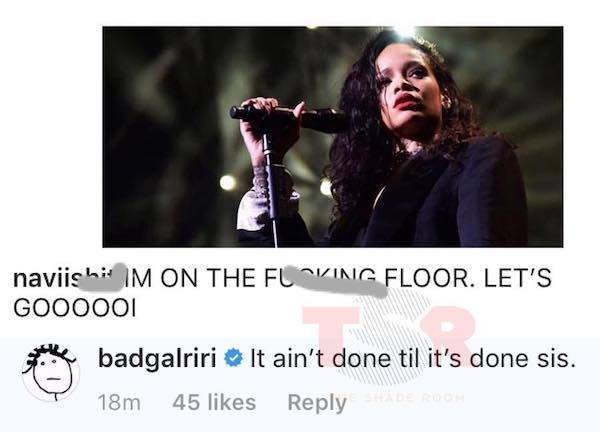 Our sources told us that the project is in the finishing stages but not yet ready for release. “The album is definitely in the final stages, but she won’t release it until it’s fully completed,” sources said. “We know the fans are eager to hear her new body of work but the wait will be worth it.”

Some fans on social media are expressing their disappointments over the album not being ready. “I’ll tell you one thing if R9 don’t come with a R10 and we waited this long I’m gonna be heartbroken,” one fan wrote while another added, “I just want the music I been done with Nicki and so far the only Cardi song I like is money. Hurry up sis and drop them new music already.”

Fans are clearly eager to get their hands on some new music from Rihanna, but she will not drop until she knows it’s ready.