Rihanna has stepped forward to update fans on her upcoming dancehall album.

Rihanna fans, aka Navy, are eager to get some new music from her to the extent that they are now harassing her on social media. At least one lucky fan managed to get a response out of her this week, and she assured her that the new music is coming soon, but for now, she is juggling makeup, lingerie, film, and music simultaneously. That is absolutely true given that Rihanna is currently building a billion dollar makeup and fashion empire and also starring in films like Ocean 8.

She assured her loyal fans that when the music is ready, she will be the first to announce it, but she is as eager as everyone else to drop some new stuff on the airwaves. “When the music is ready, you won’t have to ask for it,” Rihanna said while adding, “But it’s coming. Just not today sis. I’m hype too tho, it can’t come soon enough.” 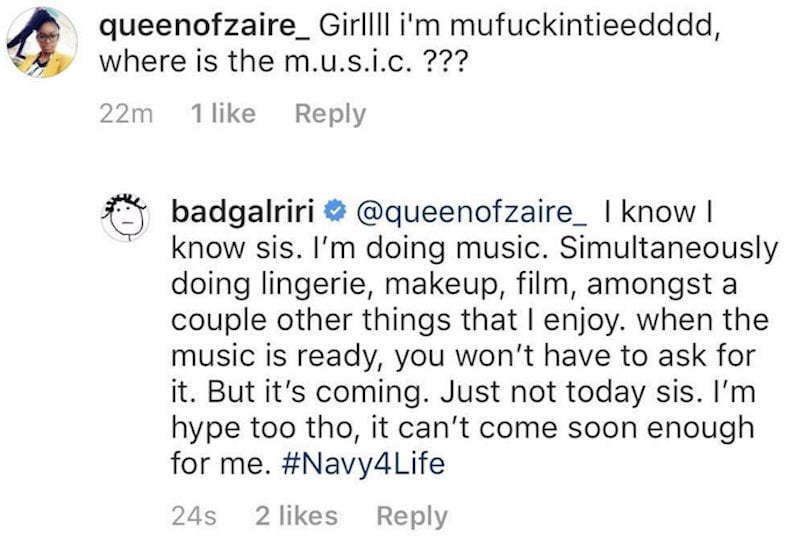 In July, Urban Islandz reported that Rihanna recorded 500 songs for her new dancehall album and from that massive list she will pick out around 20 songs that will make the cut. She has been working with a number of recognized dancehall producers and songwriters over the past year and a half, and now the project seems to be finally coming together.

Rihanna’s last album ANTI was released in 2016 and has been certified three times platinum by the RIAA. Despite not dropping a new album in over two years, RiRi remains one of the most streamed artists on the planet. Rihanna has eight albums under her belt since breaking onto the music scene in 2005 with her debut album Music of the Sun. That album was primarily comprised of reggae-themed singles, and then she went pop on her sophomore LP A Girl Like Me the next year.

For her ninth studio album, RiRi will be going back to her Caribbean roots with an all dancehall project.