Vybz Kartel has added his voice to the feud between Beenie Man and Spice over who the dancehall queen is.

The firestorm started last weekend when Beenie Man told Winford Williams on OnStage that Spice is more like a self-appointed designated queen of dancehall and not one who has the support of the vast majority of dancehall artists. Spice shot back on her Instagram page saying that Beenie Man too is a self-appointed king of the dancehall, but the real king, in her opinion, is behind bars, Vybz Kartel.

Seems the Gazanation boss has been tuning in to whats been happening and decided to add his voice to the mix. Kartel posted a comment on Spice photo on IG this morning assuring her that she is the queen. “Queen of Dancehall you look good nuh bloodcl**t,” Kartel wrote. “Queen of Dancehall in her throne drinking sperone.” Spice posted a photo of herself actually drinking Sperone. 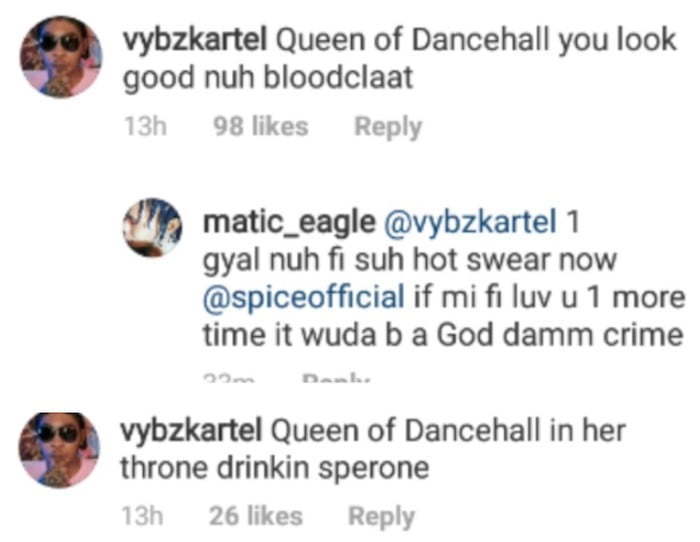 Our Gaza sources told us that Vybz Kartel supports Spice as the queen and himself as the king. “Addi the King and Spice the queen that’s how dancehall set right now and Vybz Kartel showing that he can rule from behind bars,” sources told us. “All the old people them fi retire and stop badmind the younger acts. Addi a the king, the greatest to ever set foot on a dancehall platform no one can dispute that. Lady Saw was the queen but she gave up the throne and baptize, we wish her the best, but the only female who can fill her shoe right now is Spice.”