Rihanna new album ANTI is nowhere near ready because she is still in the studio working hard.

The Bajan pop star’s eight studio album has been in the making since last year. The latest round of rumors suggested that the album would arrived on Black Friday on TIDAL and then a global release on December 4. Well both date come and gone and no album, except for some creepy videos on her ANTIdiary website.

Sources close to the project told Urban Islandz that Rihanna is still in the studio putting together the album which means we may not see the album until next year.

“The album is mostly completed there are a lot of songs and she is still in the studio working on more material that could potentially be on the album,” sources told us. “Successful artists always have this problem when putting out a new album because the stakes are high and you always want to top your previous albums.” 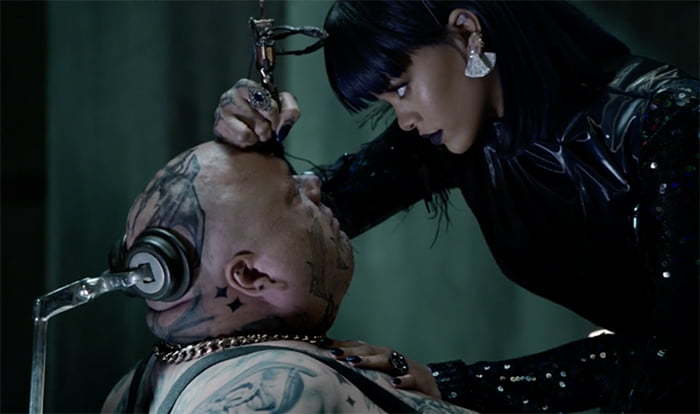 Sources also told us that Rihanna has already recorded over 25 songs for the highly anticipated project and is still recording more material.

“Over 25 songs are available to choose from and what makes the process difficult is the fact that these are all quality album worthy songs,” sources said.

Last week Rihanna premiered another video on her ANTIdiary website sponsored by Samsung. The fourth video in the series of 8 shows the “BBHMM” singer torturing a man strapped down in a chair.

She was seen tattooing an image on his forehead while ink drained from his eyes.

The video will continue to be released until Rihanna unlock the final room and find what she is looking for, the album perhaps.

So far there are no official release dates for the album ANTI and her fans patients are running out. So dropping the album sooner than later wouldn’t be a bad idea.

Rihanna ANTI tour will be kicked off on February 26 and fans are hoping that they can get their hands on the album.

Last week, Sia revealed during an interview in the UK that she had a meeting with Rihanna and played several songs for her.

Sia said that Rihanna is still looking for tracks for anti shsyshhshd ??? that album is coming in 2017 pic.twitter.com/UIyrn9BpHt