Tyga and Kylie Jenner are heading down splitville according to multiple reports.

Tyga celebrated his 26th birthday on Thursday, November 19 and a ton of his celebrity pals showed up at his party but his 18-year-old girlfriend Kylie Jenner was a no show and neither were any of the Kardashians.

The “Ayo” rapper had dinner at the famous The Nice Guy in West Hollywood and then head to 1 OAK with the likes of Wiz Khalifa, Christina Milian, Leonardo DiCaprio, A$AP Rocky, Jamie Foxx and more. Again there were no Kardashian/Jenner present.

By now everyone is wondering what was Kylie Jenner doing on Tyga’s birthday. She was hanging out with a few male friends while her sister Kendall Jenner posted a telling message on Instagram. 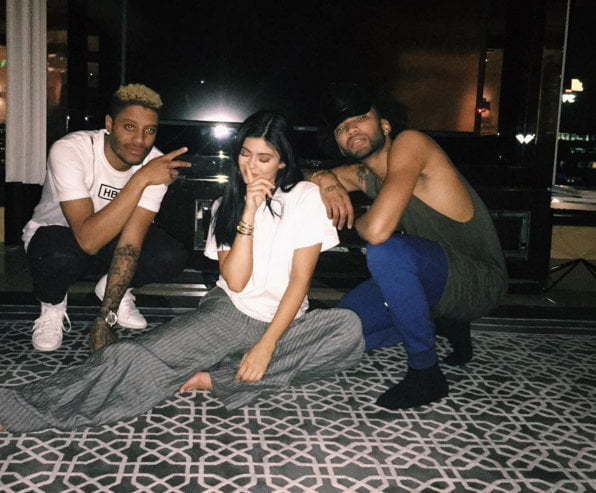 Kylie didn’t even wish her boyfriend a happy birthday on social media. You can recalled Tyga threw a huge birthday bash for her in August and bought her a brand new Ferrari for her 18th birthday.

Sources are saying that the couple are having problems over some cheating allegations.

“There are a lot of cheating allegations flying around most of it is on Tyga’s side and the Kardashians are very protective of their youngest so you know that is not going over very well,” sources said.

TMZ also reported that sources are saying that it was Kylie Jenner who dumped Tyga over something horrible that he did. The site also said that the Kardashian clan pressured Kylie break things off.

So far no official word from either of the two about their rumored breakup.

In related news, Tyga celebrated his big day with a new single that he title “Happy Birthday.” The single is now available on iTunes.