Dancehall star Mavado has stepped forward to address rumors of his wife, Monique McKenzie, being pregnant for another man.

Following Mr. Vegas’ mishap on Facebook, a story surfaced via a Facebook fan page not run by Mavado alleging that McKenzie, who shares a son with Mavado, is pregnant for another man.

“Sources close to Ms Mckenzie have stated that a terrible mishap had happened during the time Mavado had gone to Jamaica for 3 weeks to perform at the annual Guinness Greatness Concert,” the story on the Facebook page reads.

A close source to the Gullyside exclusive told Urban Islandz that Mavado found the report hilarious and offensive.

Mavado Trial Date Pushed Back To Next Year

“Someone sent the story to Vado BBM, he found it hilarious so he just post in on Facebook as fun,” the source said.

The below image is a screenshot from the Facebook page. However, Mavado’s manager Julian Jones-Griffith confirmed with Urban Islandz that this Facebook fan page is fake. 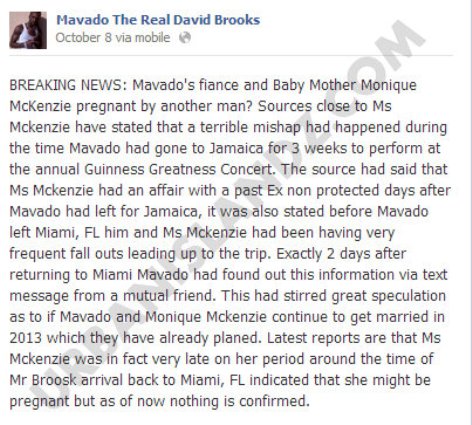