Mr. Vegas is fuming on Konshens on Twitter right now.

When asked about Vegas crying during his interview with the New York radio station, Konshens says he think it was a fake cry.

That statement made Mr. Vegas very angry. The “Bruk It Down” deejay quickly run to Twitter to blast Konshens over the statement.

“I was just begging the same station u trying to destroy my credibility on, to play your record. Don’t u have a daughter? If this is a joke and a lie for u, u are a sick MF! What do u have to gain from this? What kinda hype can you get from this? You think if a n***a violate ur daughter, it would be a joke for me?” Mr. Vegas wrote on Twitter.

Konshens responded to Vegas’ tweet in a very mature way.

“@MrVegasMusic With all due respect Re the f*k lax, how credibility an song playing drop in? ITS A COMEDY SHOW!!!”

“@MrVegasMusic as artiste, we too touchy for the career WE CHOSE dats why unnu always kick off every second … RELAX an drop some more hits.” Konshens Twitter. 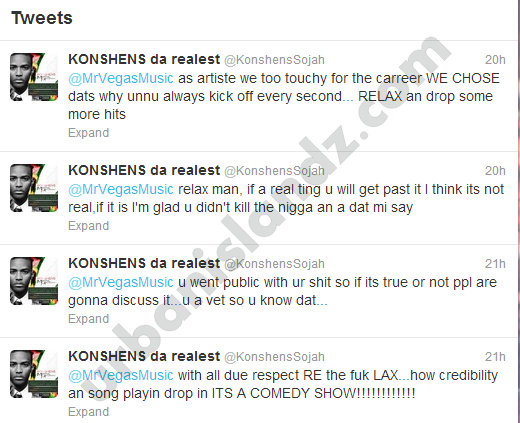 Do you think other artists should leave the topic alone?