Snoop Dogg’s eldest son, Corde Broadus, was a promising American Football player but it seems is interest in becoming a baller is out the door. Just like Diddy’s son Justin Combs, Broadus was among the top pic for several colleges after he graduated high school.

According to reports the 19-year-old put his ball playing career on old to work on his rap career and smoke weed with his dad. His stage name is Spanky Danky and he sends out several tweets of photos of him smoking weed with Snoop.

We have yet to hear any of his music but got to admit he has one of the greatest rapper of all time as his father and mentor. 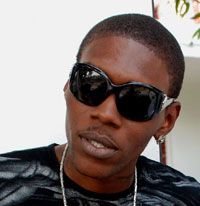