Young Money rapper Drake is on the cover of GQ magazine’s April 2012 issue. In the magazine, Drake gave some insight into dating life, his songwriting skills and why promiscuity doesn’t quite work for him any more.

“I’m trying to find the same feelings that I had for women when I had very little going on, which is tough,” Drake said about his inspirations to write songs. “When I was in my mom’s house, I had nowhere to go, no real obligations. My girlfriend at the time, if she was mad at me, my day was all f-cked-up. I didn’t have anything else. And that made for some of the best music, I think, to date. Records where I felt small. …It’s really difficult for me to find something that makes me feel small.”

The “Find Your Love” rapper also opens up about settling down and getting read of his promiscuous persona.

“There’s just a time where it was like, just getting p-ssy. Where I was in that sort of ‘I’m young, I’m going to disconnect from my emotions and just do what everyone else tells me I should do and just a be a rapper and have my fun.’ And for me as a person, it just doesn’t work. The seconds after a man reaches climax, that’s the realest moment of your life. If I don’t want you next to me in that fifteen, twenty seconds, then there’s something wrong.”

Drizzy puts on his European tailored suit and do a “Little Favour” for the GQ’s cameras. 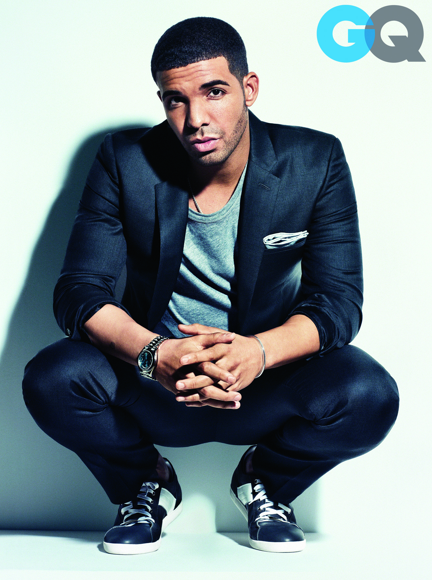