Bob Marley’s favourite ride, a 1976 Land Rover SUV, will be restored after spending two and half decades at the Museum.

For 25 years the Land Rover sits comfortably at 56 Old Hope Road and has become a favourite for tourist visiting the Bob Marley Museum. The vehicle, which was a popular off road vehicle in the 70s and 80s, was Bob’s favourite whip that he drove in Kingston and rural Jamaica.

ATL Motors, the dealer for Land Rover in Jamaica, will undertake the task of restoration at their Montego Bay office.

“It has been at the museum since it opened,” Lynch-Stewart said. “It is always at the front.

“We made contact with them (ATL) to see if it could be restored. They then contacted the headquarters in London, so this discussion has been going on for some time,” Lynch-Stewart said. Next for the Land Rover, she said, is “To pull it down, assess what is required and take it from there. They don’t know what they will find.”

The original parts that are replaced will also be at the museum on display.

Last year Bob’s favourite guitar was loaned to the Grammy museum in Los Angeles for a year, a replica is now at the Bob Marley museum at 56 Old Hope Road. 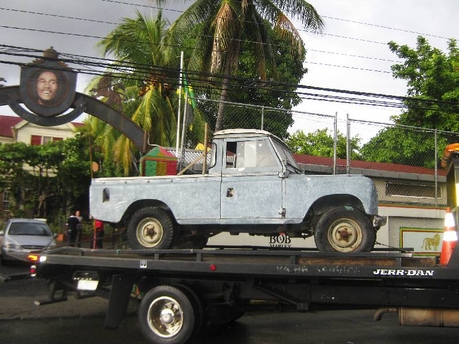