Last week, an image of an LA woman with a huge Drake Tattoo inked across her forehead hit the net.

Clearly she is a massive fan of Drizzy.

Vice Online recently caught up with the LA Tattoo artist who had the honors of inking the lady’s forehead up and he revealed that the lady was probably ‘on one’ when she came into the shop. 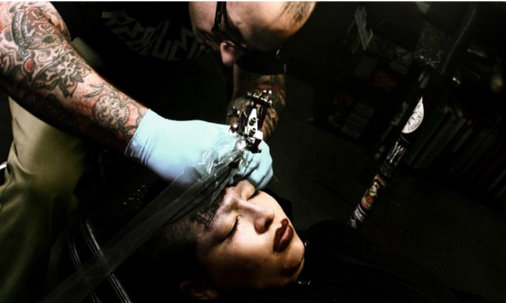 “Yeah, she was really psyched about it,” the tattoo artist said. “She had the sh*tty font all picked out on her iPhone ready to go and was pretty adamant about putting it on her forehead. She didn’t say a word about what it meant to her, some of the guys at the shop asked her, and she just kinda giggled at them. When I printed up the first image of the lettering, she wanted me to go bigger, so that it went pretty much from each side of her hairline to the other. I thought she shaved her eyebrows for the procedure, so when I put the stencil on the first time, it was right over her (missing) eyebrows, but she had me enlarge it a bit and push it up towards the hairline. But yeah, she acted as if she had planned it out for a while; though I’m not really sure how much extended coherent thought could actually go into getting such a stupid tattoo on your forehead.”