In the issue, Rihanna reveals that she’s secretly terrified of childbirth and baby weight and that she likes her guys “hot and hung”. She also speaks on her love/hate relationship with twitter and being able to relate to men who like the thrill of the chase.

On Twitter
I was so against twitter. I couldn’t understand how people were supposed to care what I was doing at any given moment. Then I started to figure out you can treat it like a giant chat room: I can respond directly to people’s questions. It makes it easier to deal with the flak around you because people have a sense of who you are.

On Dating
It can definitely be intimidating to guys to date someone in the industry. And it’s really hard to find a guy who doesn’t care about that stuff. Right now, its easier to just having my career to focus on. 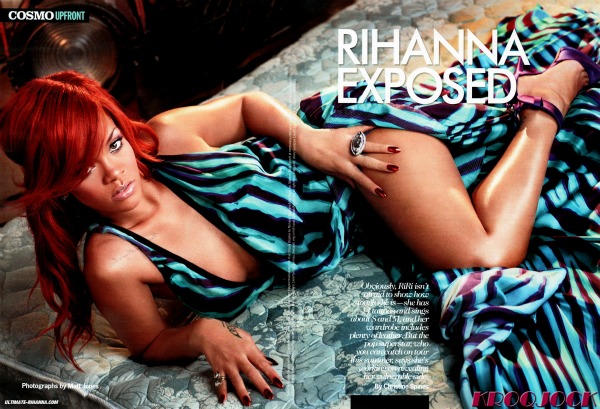 On what turns her on
I’m turned on to a guy by different things. It could be the way he looks. It could be his intelligence. Its really a spontaneous thing. I’m open to love but guys should have to earn it because the minute they get it, they want something else. Men are like hunters; they like the chase. So you have to keep them guessing.

Actually, I’m like that too. I get bored very quickly. So if someone can make me laugh, that’s the best.

On letting her guard down
It’s something that I’m working on. Melissa always says to me, ‘You need to let your guard down.’ Because even if a guy texts me or says something slick, I would never entertain it. I think, “that’s bullsh-t. Its just an act.’ And Melissa’s like, You’re crazy. Let your guard down.” But I will. It’s going to happen.