iPhone Apps is proving to be a lucrative business with more people looking to get a hold of Apple’s most popular gadget as it moves into Verizon. Billboard will not be left behind in the apps race, as it launch its own chart app.

The Billboard Chart App features the company’s 15 influential music sales charts in addition to genre rankings and ringtones. The app updates each of Billboard’s charts on a weekly basis, allowing listeners to track their favorite albums’ sales over time. It will also offer 60 years worth of album chart history and 30 second music snippets, both of which can be searched by artist, album or song.

Billboard’s Editorial Director Bill Werde said, “Our charts are already a huge draw on Billboard.com, whether for music discovery or as a measure of popularity, so it makes sense to apply them to the easy navigation of the iPhone, where users can access them on-the-go…[t]his app is the entire history of Billboard charting at your fingertips.”

Peep an image of the App below 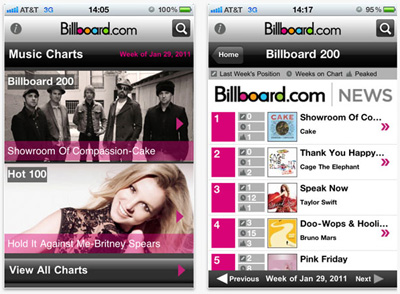