Bounty Killer and Shaggy are impressed by Jada Kingdom’s “GPP.”

Dancehall artiste Jada Kingdom is getting high commendations for her latest track, “GPP”, released last week. The song is now at No. 4 on the YouTube Top 10 trending music in Jamaica. Kingdom brings a sultry old-school pop vibe to her unique vocals on the Di Genius-produced track, which sees the dancehall singer, Stephen ‘Di Genius’ McGregor, and her ex Verse Simmonds being credited as writers.

“Yuh wan get rid of the crosses outta yuh life, call mi now,” Jada says at the end of the track.

The track is described by her label Republic as “raunchy above a soulful sample and fifties-style piano. It’s girl meets guy put it on him, and guy gets attached, feels entitled, and becomes controlling. The title says it all,” Jada says.

The song has been well-received by fans and some of the greats in dancehall like Bounty Killer and Shaggy, who also commended Jada Kingdom on the track and its potential to be a chart-topper. 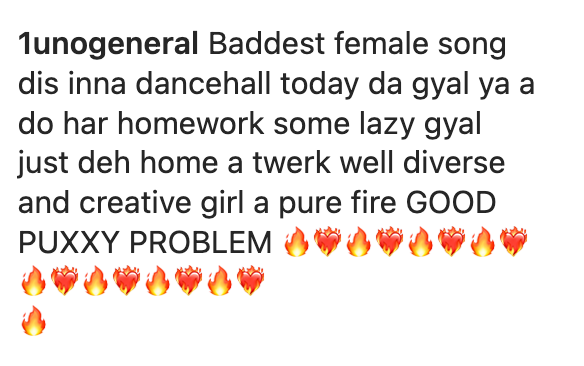 Shaggy also dropped in a comment praising the artist. “Chune shat!!!!! wicked from the 1st time me hear it!!! Congratulations @jadakingdom,” he wrote.

Verse Simmonds also praised the track. “The real music. God know Wass up! Bless up mi general!” he wrote to his former girlfriend.

In the meantime, Jada Kingdom has been busy as she was recently in St. Vincent for Summer Fest on Sunday, August 14.

The artist has been quiet on the entertainment side since releasing GPP as she shared that she recently lost her grandmother, who helped to raise her.

Watch the video for “GPP” below.