Social media detectives quickly noticed this when Nicki Minaj and Doja Cat disappeared from Megan’s following list on Instagram on Thursday. This, for many social media users, is enough to confirm the speculations that were already spiraling that Megan Thee Stallion and Doja Cat were feuding because the latter declined a collaboration request.

While neither the “Need To Know” nor the “Thot Sh*t” rappers have not given any public confirmation to the rumor, Megan’s small social media activity is enough to signify that there is definitely something happening behind the scenes. Fans are speculating that while the collaboration feud would not actually involve Nicki Minaj, the “Anaconda” rapper could just be pulled in by affiliation. Nicki Minaj and Doja Cat are known friends and collaborators, following their partnership on the very successful “Say So” two years ago.

Others are speculating that Doja Cat originally declined to work with Megan because of Nicki, who they believe holds some grievance towards Megan since her collaboration with Nicki’s known nemesis, Cardi B, on “WAP.”

Megan Thee Stallion had previously collaborated with Nicki Minaj for her 2019 hit “Hot Girl Summer,” but fans had speculated that the two rappers have not been seeing eye to eye since “WAP” dropped. Nicki Minaj had reportedly cut ties with Megan on social media following “WAP’s” release.

Megan had, however, told E! News’s Daily Pop then that she was not picking sides between Nicki and Cardi. “I really, really, really like both of them. They’re two different people, two different rappers. It’s not even the same. I feel like we need to stop trying to compare them,” she said. 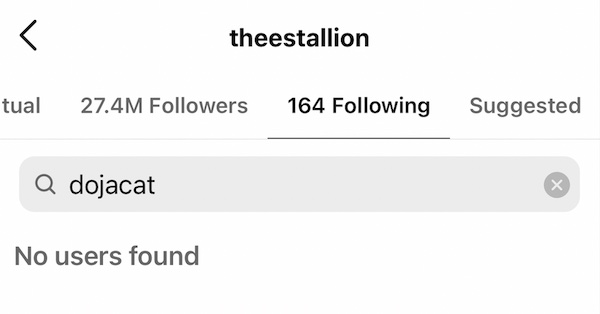 But apparently, Nicki did not share the same sentiments. Despite the Trinidadian rapper unfollowing the Houston star a year ago, fans are still grappling with Megan’s reciprocation.

“It’s weird that Megan just all of a sudden unfollowed both Doja & Nicki,” one social media user said. Another commented, “megan made a mistake unfollowing nicki and doja because barbz and kittens are like the biggest female rap stan bases.”

Other users are just trying to find out the reason behind the move, which, despite being small, is very suspicious. “Why did Megan unfollow Doja Cat and Nicki Minaj on Instagram WTF?” one person asked in disbelief.

Despite the spiraling comments and speculations, the rappers are yet to address the public.

It’s weird that Megan just all of a sudden unfollowed both Doja & Nicki ?????

Megan is so childish, as if Nicki & Doja give af that she unfollowed. pic.twitter.com/51M6VXgc3O