NLE Choppa has stepped forward to address a fight with a fan of his rival NBA YoungBoy.

On Monday, video footage started making the rounds showing a man attacking the Memphis rapper at LAX. Several clips showing different angles of the melee have since surfaced. The man claimed he is a member of YoungBoy Never Broke Again’s 4KT crew, but the Baton Rouge rapper has not confirmed the claims.

Shortly after the clips hit the net, NLE Choppa addressed the fight on Twitter while confirming punches were thrown from both sides but none connected to him while his connected.

“It’s a difference from getting hit and falling then fighting in flip flops and falling on yo own,” Choppa tweeted. “I fell throwing a punch Ian get hit til I was otw down – and my backpack 20 pounds. Buddy lip swole everything I through connected.” 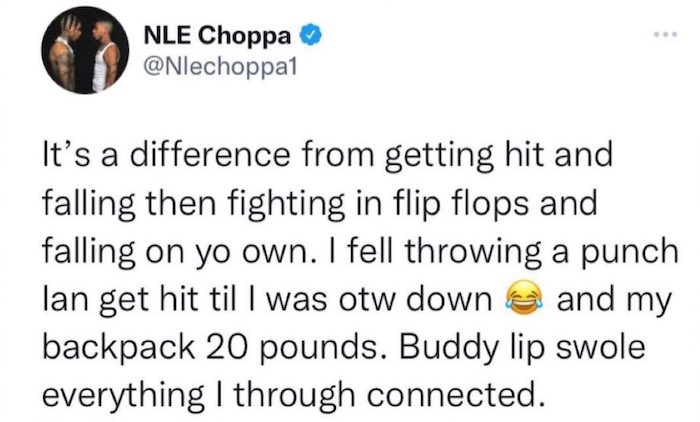 Since the melee, NBA YoungBoy‘s supporters have been coming out the woodwork to react, with one person on Twitter sending a chilling threat to NLE telling him to watch his back.

Late Monday evening, Choppa also shared a photo of himself on the basketball court, sending a message to Chris Brown. “Somebody Tell @chrisbrown Rematch At His House 1 On 1,” he tweeted.

The Top rapper is currently on house arrest in Utah after being granted bail last year, pending his court cases in Baton Rouge and Los Angeles. He has been spending time with his loved ones and recording new music. Last year he released his latest album, Sincerely, Kentrell, to rave reviews from fans. The project sold 137,000 album-equivalent units the first week of release in September to debut at No. 1 on the Billboard 200 chart.

Somebody Tell @chrisbrown Rematch At His House 1 On 1 ???? pic.twitter.com/w0XFjMsNGm