Skillibeng is clearly ignoring the critics and continues use the formula that has been working for him.

While E-Syde deejay emerged from 2021 as the biggest year of his career, Skillibeng seem to can’t shake off the negative comments about some his music, which was the case this week after he previewed a new song.

The “Crocodile Teeth” deejay still finds himself trying to ward off comments calling his music whack, as he had been doing for more than half of his rapidly developing career.

The deejay’s latest unreleased tune, apparently called “Whap Whap,” is not sitting well with many fans and followers, and many have filled the comment section of his post displaying a preview of the song with laughing emojis.

One other comment also gained a response from the “Mr. Universe” deejay, which was that of Shawn Ice, an up-and-coming Dancehall/ Reggae sensation who urged fans to stop hyping up Skillibeng’s rather unappealing music. 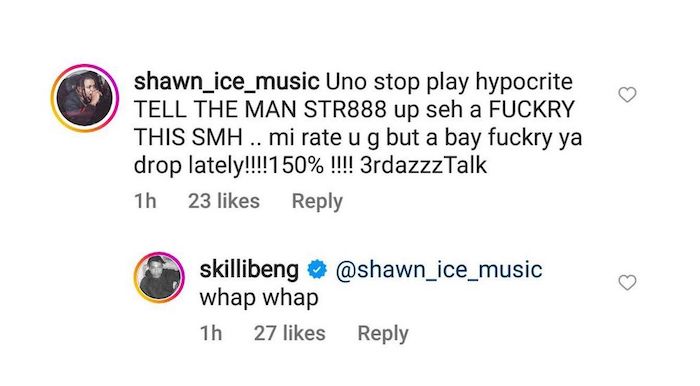 The term “whap whap” is also repeated as lyrics and background vocals in the preview of the track, with not many other words, except for the hailing of communities such as Grants Pen, Whitehall, Portland, and Seaforth.

This is not the first time the 25-year-old St. Thomas-born deejay faces backlash for producing music that some fans call trash.

Following the release of songs such as “Yo,” “Money Tree,” and “Coke,” many social media users called out the artiste for what they said are “nursery rhymes,” and they accused him of having a “slow flow.”

At this point, many social media users believe the deejay has been intentional in producing his music, apparently because of the perceived pre-eminence of his platform.

Despite the negative feedback from critics over the past few years, Skillibeng has kept himself and his music above the heads of naysayers. He is continuing to make strides in the international music scene.