What started as a joke on Tik Tok has now gone viral as a woman claiming to be the daughter of Chicago rapper Twista alleges that her desperation to meet and form a relationship with her father led to her being allegedly sexually assaulted by the rapper’s manager.

In a Tik Tok video, the woman, who claims to be an artist and goes by the name Sparkle Cahtour, explained that she had wanted to meet with her father with whom she did not have a relationship.

However, somehow she came to know his manager, who offered to attend a concert where she would get to see Twista at a meet and greet.

“I done went 18 years of my life without seeing this man, so it was cool,” she explained as she said Twista refused to meet her.

Later, she says she was pursuing a career in music, and sometime in 2021, the manager reached out to her.

“He told me he liked my music and he would like me to open up a show. For Twista. He told me he had heard the whole back story and he said me openin up for Twista would be a great idea… open the show and y’all could talk at the end of the meet and greet, you know,” she said.

The young woman, however, said when it was time to meet the rapper, his security said he didn’t want to talk to her. This led to the manager personally reaching out to help her with bookings.

“At this point I’m just excited to be on stage more than anything. And you know, came time to meet him. He didn’t wana walk….the manager that was managing and booking me on shows later that week he was about to have me open a show for Miguel and some other people and told me that if I wanted to get to higher levels, I had to buss my hoohaa (vagina) open. And I told this man no. He pulled his penis out, put a condom on it, and I was in the hotel room had to call my grandma and my mom, sexually assaulted at this point I didn’t want anything to do with Twista… this manager done sexually assaulted me. Went through a lot,” she said.

Twista has not addressed the claims, but the manager in question is alleged to be Rawle Stewart, and his contact was shared with the young woman surprisingly by Twista.

A screenshot of an Instagram DM from Twista’s official blue tick account had sent the manager’s name and number to the young woman in 2016. She shared the screenshot to prove that there was no question about whether she was really Twista’s daughter, as some of her followers asked if she had a DNA test to prove he was her father.

Further, the manager also allegedly responded to her claims, and she shared a screenshot of their conversation from July 22, 2021.

The manager said that he found out that she wasn’t Twista’s daughter and dropped her “like a bad habit that’s why you mad.”

However, the young woman came back with another receipt from an Instagram account djg_love262, where she says that the manager sent her messages after he assaulted her.

The screenshot offered apologies for disrespect and also has a reply by Twista’s alleged daughter where she tells him to imagine his daughter telling someone five times she doesn’t want to have sex. 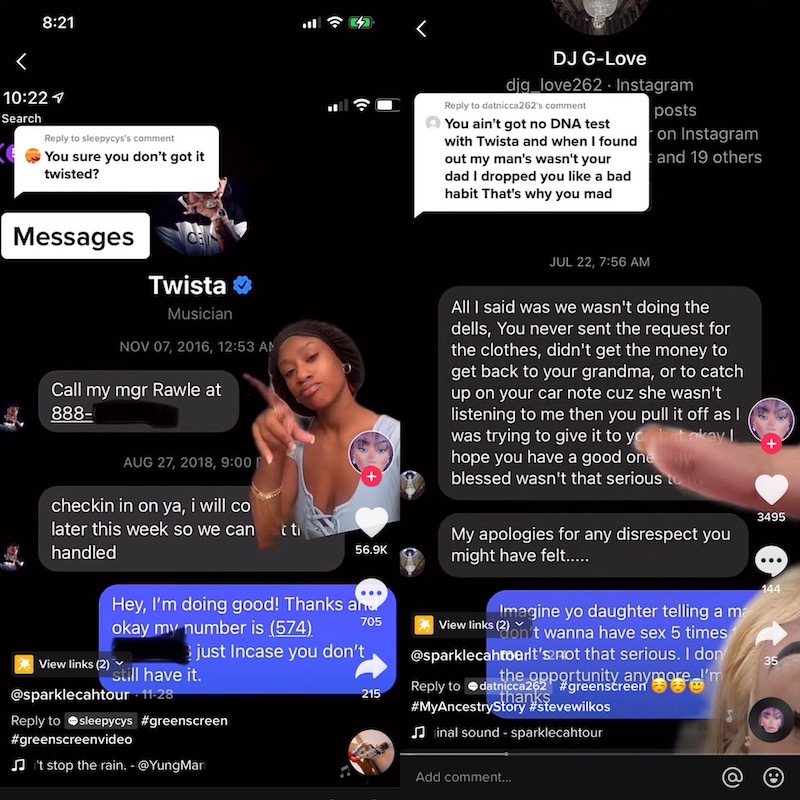 The Instagram account has since been deleted. However, a Tik Tok account claims that the young woman is scandaling his name because she owes him money after he bailed her out of jail.

The young woman has since said she couldn’t manage the stress to report the incident to the police but was learning to heal and cope on her own.

In the meantime, Twista has not reacted to any of the videos of his daughter. It’s not the first time the rapper has been called a “deadbeat” father.

The former Atlantic Records rapper, whose real name is Carl Mitchell, held a Guinness world record for being the fastest rapper in the 1990s. However, his reputation suffered greatly when his wife Rashida alleged that the rapper was a negligent father. She and Twista had divorced in 1999, and the court had ordered child maintenance.

The woman also alleged that the daughter Aaliyah who was born in 1994, had not seen her father since she was ten years old. A report in 2004 says she hasn’t seen her father much over the years.

It’s unclear if that young woman is the same as the one on Tik Tok.

The rapper is only known to have one child, Aaliyah.