Spice is not one to take directions from anyone, and time and again, the Queen of the Dancehall has shown that she thinks for herself and won’t be controlled by anyone.

On Thursday, Spice responded to Sizzla Kalonji‘s demand that she not participate at a Toronto Pride Festival where she is booked to perform. Spice, in her usual feisty way, let the radical reggae singer know that she is not the one.

“[Sizzla Kalonji] come make mi “pull out” you turban and whine pan yuh back way,” she captioned a screenshot photo with the Jamaica Star headline ‘Sizzla calls on Spice to pull out of Pride Toronto Festival’.

Earlier, Sizzla had called on Spice not to perform at the 2022 Pride Toronto LGBTQ+ festival.

“Don’t do this show,” he had scribbled on a graphic reposted to his Instagram, which announced that Spice was booked for the event.

“We nah sell out, we nuh hungry. Jamaica full a good food and very nice people. Our African heritage and culture is rich.”

He further aired his disagreement at the festival.

“Jamaican artiste already knew that our indigenous music bashes against homosexuals and lesbianism,” he said. “We bash against anything that is corrupt and misleading to our people.”

He also asked Spice not to “mix reggae and dancehall” with what he termed as “evil, nasty ways.”

“If I saw her going on a road that’s not right for her, I’ll show her; she is my Jamaican sister and a great artiste,” said Sizzla.

Spice had shared news about the booking earlier in the week to her than 3.8 million followers.

Spice is set to kick off the festival weekend and is one of three headline acts, including House of Miyake Mugler and Symone, winner of Season 13 of RuPaul’s Drag Race.

“People need fi understand that it’s 2021. People of all race, age, sex, gender, type, culture, group, community, planets, solar systems, etc are listening to music. You don’t have to ACCEPT or AGREE with a person or group lifestyle or sexuality, and you don’t control who’s listening to your music. At the end of the day, music is made for everyone to enjoy,” he said. 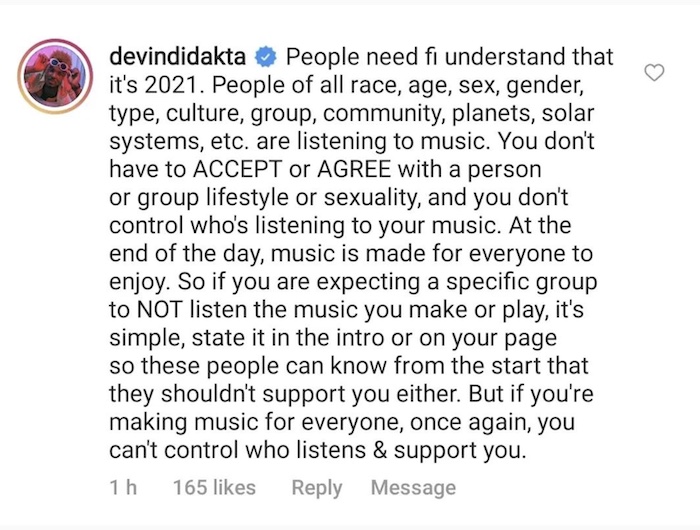