Lil Baby got back his $400K after learning that the Patek Philippe watch he was flaunting on Instagram was a fake.

While the Atlanta rapper was rightfully angry at the loss, he’s already come up with a way to ensure that it never happens again. His suggestion, which he posted on his stories, is simple, he should be added to the official Patek Philippe list.

Lil Baby, known for his aggressive lyrics, added that aftermarket jewelers like Rafaello And Co, who sold him the fake timepiece, are threatening to make him do something he would later regret. Maybe his colleague, Drake, who is on that list, can help him out even though Drizzy is busy these days dominating the airwaves with his massively successful new album, Certified Lover Boy.

Lil Baby shared on IG last night that he got a full refund and four giant diamond-studded rings as compensation from the jeweler for his troubles.

“Now @rafaelloandco y’all Kno better then to sell ME of all people a FAKE Or anything that could be called a FAKE ! I stand on my name the same way y’all should ! Ain’t no such thing as a mistake when that money involved! Don’t Fuccin Play Wit me Cause when I’m on that I’m on that,” Baby wrote.

Rafaello And Co has since posted a statement saying, “We do stand on our name just like he does that’s why today he got those four rings for free and his money back because we didn’t do our homework on the watch and we take Full responsibility for that. But it didn’t happen intentionally and he knows that for a fact.”

The irony is that it was just a few days ago that Lil Durk warned people of scam-happy jewelers. According to Durk, these unscrupulous jewelers have been passing off fake products to their unsuspecting clients. “Stop buying all this jewelry without knowing what you doing,” he wrote on his Instagram Story. He added: “Alot of the sh*t fake and some is over priced get 1 jeweler and stick to em I’m telling you y’all a*s gone be pissed when the truth come out.” 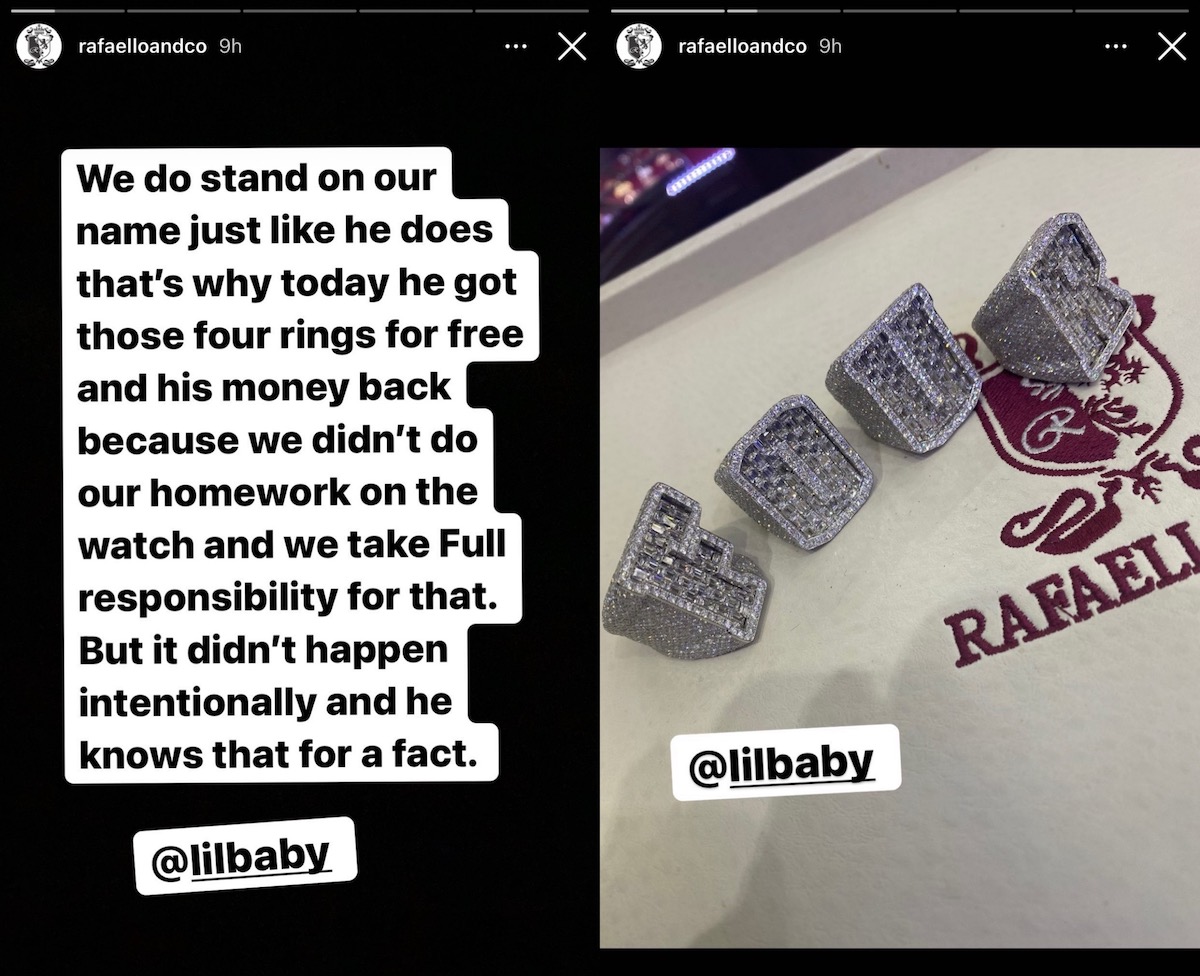 It was not too long after that warning that Lil Baby was caught showing off his supposed limited-edition Patek Philippe watch, telling his fans that it’s “not regular.”

Some sharp fans and other pages dedicated to busting fake watches revealed that the watch was indeed a fake. Some pages even had side-by-side comparison images showing the differences between Lil Baby’s fake watch and the authentic Patek model.