Juicy J and Shenseea cooking in the studio.

ShenYeng seems to be cooking new music as she was spotted in the studio with Juicy J. The Jamaican dancehall princess is fresh off her recent career boost, which saw her appearing on two songs on Kanye West’s 10th Studio album, Donda, and her surprised appearance at his live album listening event in Chicago.

On Tuesday, Three 6 Mafia rapper, Juicy J, shared several images of the pair in the studio. “SUPER TALENT,” he said of Shenseea. Meanwhile, Romeich Major, her local manager, spoke of Shenseea’s work ethic, which he attributes to paving the way for her growing success.

“Shenseea never take a break so when you see her winning don’t chat s*** respect her hustle @juicyj we good!!!!” Major said. 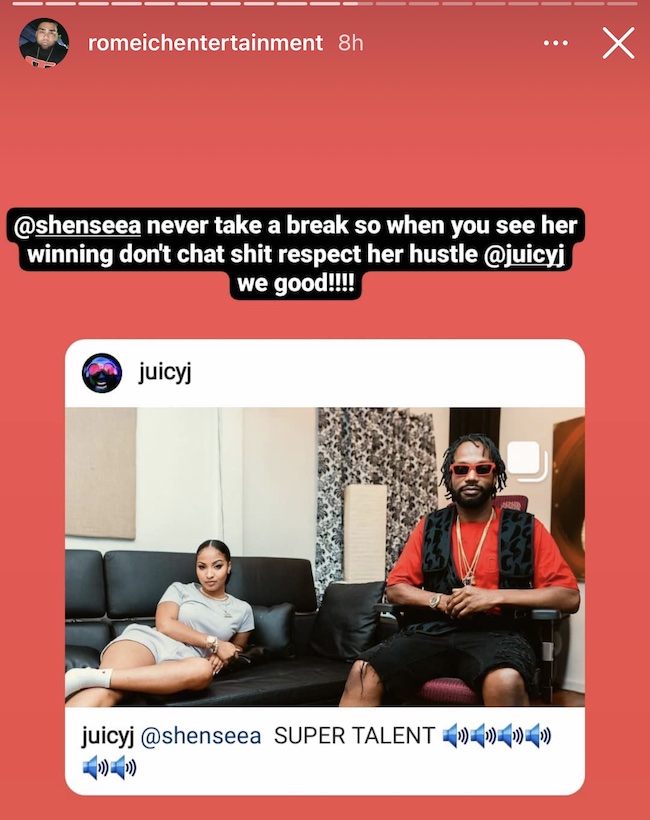 Juicy J is a Billboard charting artist with several hits like “Bands to Make her Dance” and “Dark Horse.”

Shenseea has been making moves and has been seen with a number of hit-making producers in the hip hop and R&B music industry.

Shenseea is currently in the states for several performances, including one upcoming in Miami this weekend.

Meanwhile, the deejay shared on Wednesday another accomplishment that she is the first Jamaican artist to make the Spotify daily top 5 in 5 years.