Popcaan invites Lizzo to fly out to Jamaica following a rough week.

The Unruly deejay joins the long list of Lizzo supporters as the singer butt heads with social media trolls following the release of her new track, “Rumors.” On August 20th, Popcaan extended a warm invitation to to the voluptuous singer/rapper when he shared a clip of her on his Instagram Story. His heartfelt invitation comes amid hateful comments that the “Truth Hurts” singer received online after the release of her latest single with Cardi B.

“@lizzobeating don’t cry girl come to the islands,” he wrote in the post with two smiling faces and heart emojis.

Not long after Lizzo dropped the Cardi B-assisted single, “Rumors,” she broke down in tears on Instagram Live seeing the many hateful comments aimed at her weight and body. She subsequently urged fans to spread positivity. 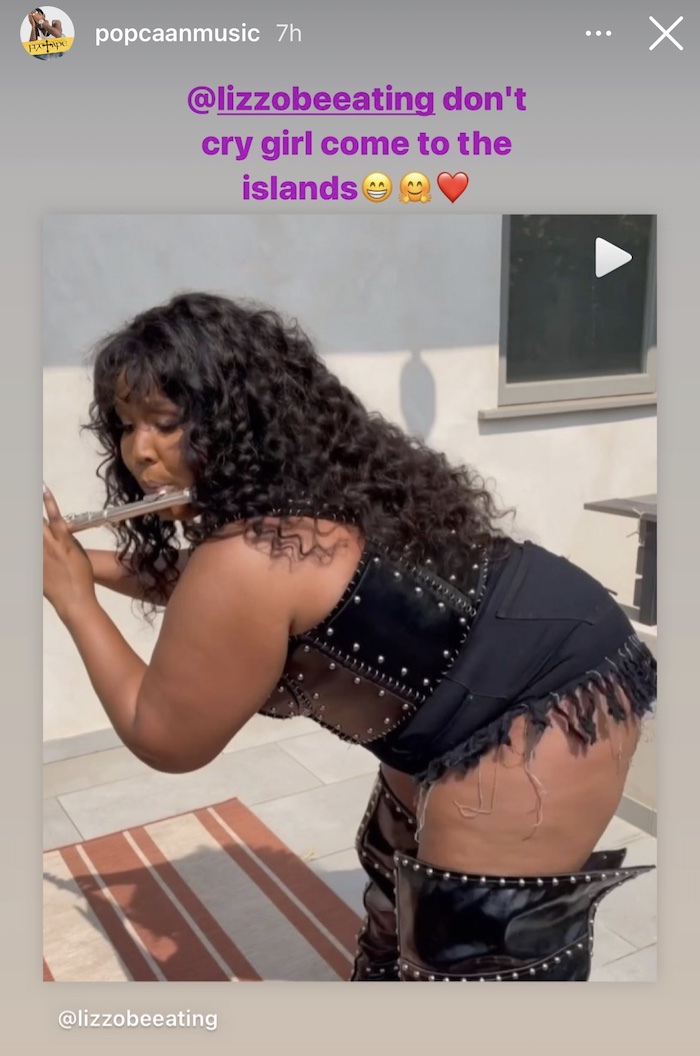 “You have people who have something…something mean to say about you,” Lizzo tearfully expressed in a now-deleted video. “I just think when I’m working this hard, my tolerance gets lower, my patience gets lower. I’m more sensitive, and it gets to me.”

The hate she received was so bad that Facebook had to take action by deleting comments that were hateful toward the artiste and banning several accounts.

In the highly-anticipated collab, Cardi B and Lizzo took the time to address everything you’ve heard about them in the press, the two were seen decked out in outfits that screamed Greek Goddesses, but after the release, Lizzo relayed that she felt like anything but.

Lizzo shared that the comments she received were “fatphobic” and “racist” towards her new video, to which Lizzo confessed were “painful.” Lizzo later stated on Good Morning America that she doesn’t mind the “fat comments,” but she feels it’s unfair that she receives such treatment.

“I don’t mind critiques about me — my music,” she said to the host. “I don’t even mind the fat comments, you know. I just feel like it’s unfair sometimes, the treatment that people like me receive.”

She continued, “People are like, don’t let ’em see you with your head down. My head is always up. Even when I’m upset and even when I’m crying, my head is up. But I know it’s my job as an artist to reflect the times, and this should not fly. This shouldn’t be okay.”

Many of Lizzo’s fans jumped to defend and support her, including her fellow collaborator. “When you stand up for yourself they claim you’re problematic & sensitive. When you don’t they tear you apart until you crying like this. Whether you skinny, big, plastic, they going to always try to put their insecurities on you. Remember these are nerds looking at the popular table,” Cardi B stated, defending her.

Offset followed by speaking out for her and the rest of the black female community after haters began expressing that the singer makes “white people music.”

“Let these beautiful Black women be great. Stop judging and bringing out negative energy. We work hard to be entertainers for the world. Let us be,” Offset relayed.

Lizzo also defended herself, “I’m a black woman making music, I make black music, period. I’m not serving anyone but myself. Everyone is invited to a Lizzo show, to a Lizzo song.”

It was in the light of all this that Popcaan chimed in to show his support, telling her that in case she’s ever in need of a getaway, Jamaica is always open for her. The post he reshared on his story was of Lizzo’s recent video in which she was playing the flute to the beat of the new track. It seems Popcaan is keeping up with all things Lizzo.

Popcaan, on the other hand, is currently in the UK, with news of a new album brewing, and fans couldn’t be any more hyped. The artist announced it on his Instagram, in the most spectacular way, while getting his hair cornrowed, eyes closed, with a large blunt in his left hand. He captioned the series of photos, “Album Brewing.” with a smoke, a closed lips emoji.

With no release date announced, fans are hopeful that it drops this year. Although Popcaan is working on his next album, it hasn’t slowed him down from having a ton of fun while traveling to the UK. The Unruly Boss was last seen at a cookout, drinking soup and hanging out with his UK friends.