Retired sprint legend Usain Bolt has seemingly reacted to a story by US news network NBC New York, accusing him of not congratulating the new 100m champion Lamont Marcell Jacobs.

The retired Jamaican sprinter gave the same reaction as many Jamaicans who saw the headline. “Wait….What…?” Bolt tweeted.

Usain Bolt, who won eight Olympic gold medals before retiring in 2017, is widely considered to be the greatest sprinter of all time, being the world record holder of both the 100m and 200m. Usain is the only sprinter to win the titles for the two sprint dashes at three consecutive Olympics, in 2008, 2012, and 2016.

Therefore, it is understandable that the Italian sprinter, who won the 100m this year, considers Bolt an idol. However, Jamaican supporters believe it is completely ridiculous that an issue is being created because Bolt has not extended congrats to Lamont, and Bolt appears to share the same view.

“Usain Bolt hasn’t yet reached out to congratulate the man who succeeded him as Olympic 100-meter champion. Not on Twitter. Not on Instagram. Not by personal message. Not through an intermediary,” NBC wrote. 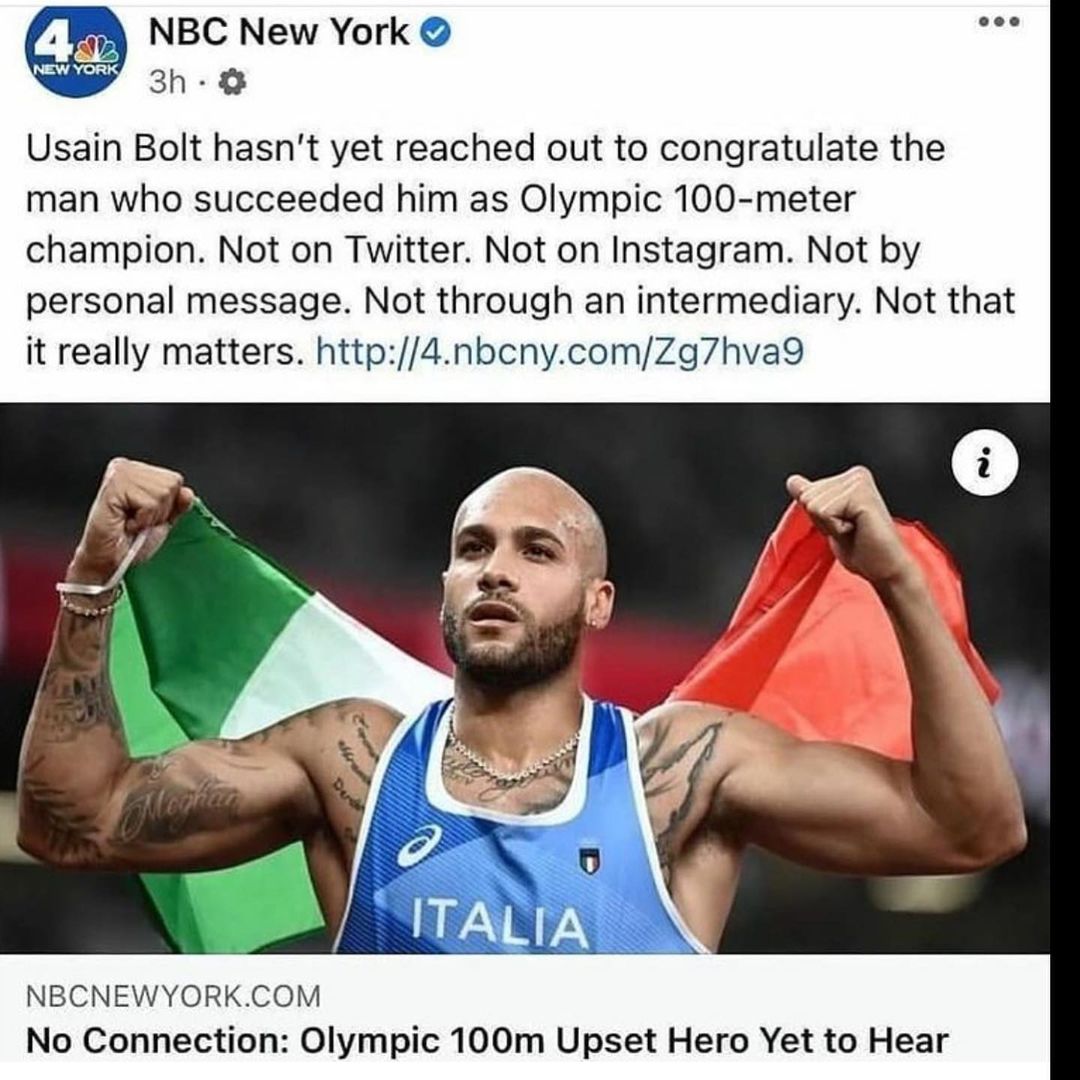 Of course, Usain Bolt meant no harm and perhaps did not think it necessary or a requisite to congratulate the new champion, but Paolo Camossi, the personal coach for Lamont, told NBC that other champions had extended congrats and seemed to be waiting for something from Bolt.

“I know he received some messages from other Olympic champions welcoming him to the club, so to speak. But not from Bolt,” he reportedly said.

The article continued to note that “Bolt will always remain a legend and the face of track and field at the Games” to Jacobs.

Still, Jamaican social media users are not very appreciative of the tone used in the article. While the article maintains that Bolt is still a legend that Jacobs idolizes, it cannot be ignored that Bolt is still painted in a negative light for not reaching out, an act, many Jamaicans maintain, is not a fault on Bolt’s part as he is not obligated to do so.

“Who knows, maybe if Jacobs does keep improving, Bolt will eventually notice,” the article ended. Of course, this did not sit well with Jamaicans, who blasted NBC for the story.

“So wah?? Him nah get the medal until him get congratulated by Bolt?? It ago full him belly? Shut your s**t NBC,” one person blasted. “A pageant? Usain supposed to hand over the tiara? What a piece a slackness!” another added.

Bolt had congratulated the Jamaican participants in the Olympic games in interviews with Jamaican media. His latest hailing went to Hansle Parchment and Ronald Levy, who took the gold and bronze medal in the 110M hurdles. The retired sprinter perhaps has shared no relationship with Lamont and, therefore, did not see it necessary to reach out.