Tory Lanez drops off a new diss track aimed at his new rival, Cassidy, and we know that Konshens is impressed.

Last week Cassidy dropped a diss track that was reportedly aimed at Tory Lanez, who he accused of “stealing” his lyrics and not “paying homage,” as Tory hinted. The Canadian singer/rapper has gone on record to reiterate that Cassidy is one of his favorite rappers of all time, which is the reason for using Cass’ flow and bars.

In 2017, Tory Lanez stopped by Funk Flex, where he freestyled over Braveheart’s “Oochie Wally” beat, from which Cassidy says his fans reported that Lanez was ripping his lyrics. Lanez borrowed from Cass during another Funk Flex run where he rapped over the “I’m a Hustla” beat.

The move proved disastrous as the legendary splitter called out Lanez for biting his style. A week later, Cassidy followed up with a diss track titled “Perjury.” Cassidy rapped, “I got more heat than that Canadian bacon.” Hip-hop heads immediately took this as a shot at the Toronto rapper.

While on “Hip-Hop Uncensored,” Cassidy discussed why he called out Lanez. He noted, “all my fan base was hitting me up saying he taking some of my lines,” which is in reference to the 2017 “Funk Flex” freestyle. With regards to the new freestyle, he had this to say, “I guess because he tried to be like me the last time he was on Flex, Flex put on the “I’m a Hustla” beat.” Cassidy said he attempted to reach out to Lanez before he made any social media post, but Lanez never reached back or even followed him on social media.

Tory Lanez has now responded with his own diss track, “When it’s Dark,” which was posted to YouTube just a few hours ago. Dancehall artiste Konshens chimed in on Instagram, “Tory is the class clown troublemaker that don’t wanna go to training and annoys the coach but he gotta play him bcuz he give everybody buckets.” 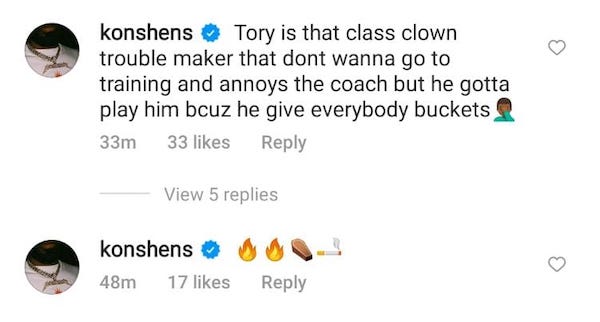 This was in response to a snippet of the track posted by DJ Akademiks. Lanez raps, “ Yeah, I’ll steal a n- flow and what…n- and what?”

Lanez is no stranger to controversy and seems to thrive on it. Following his initial freestyle, he noted that he did shout out Cassidy and reiterated he was paying homage. Cassidy, though, believes that if he really wanted to pay homage, there is more Lanez could have done than copy his style and flow.

Social media is abuzz with the fan base split down the middle, and the verdict is still out on who bodied who. Some say Tory Lanez is a “Walking W” while others say, “Cass bringing the culture back round to where it needs to be.”