DaBaby has formally apologize for his homophobic comments involving HIV/Aids after losing another gig, Governors Ball.

It’s been a week since DaBaby made his controversial comments at Rolling Loud Miami, but the artist has been losing a bag each time he wakes up as the Governors Ball has dropped him not even 24 hours after Lollapalooza announced he was kicked off the list of appearances.

The rapper’s career is taking a serious hit even though he tries to put on an appearance of not being bothered. Following a series of fallouts, he has now opted to apologize for his comments.

“Social media moves so fast that people want to demolish you before you even have the opportunity to grow, educate, and learn from your mistakes,” DaBaby said in a letter posted on his Instagram account. “Ace man who has had to make his own way from very difficult circumstances, having people I know publicly working against me– knowing that what I needed was education on these topics and guidance– has been challenging. I appreciate the many people who came to tee with kindness, who reached out to me privately to offer wisdom, education, and resources. That’s what I needed and it was received.”

“I want to apologize to the LGBTQ+ community for the hurtful and triggering comments I made,” he added in his letter. “Again, I apologize for toy misinformed comments about HIV/AIDS and I know education on this is important. Love to all. God bless.” 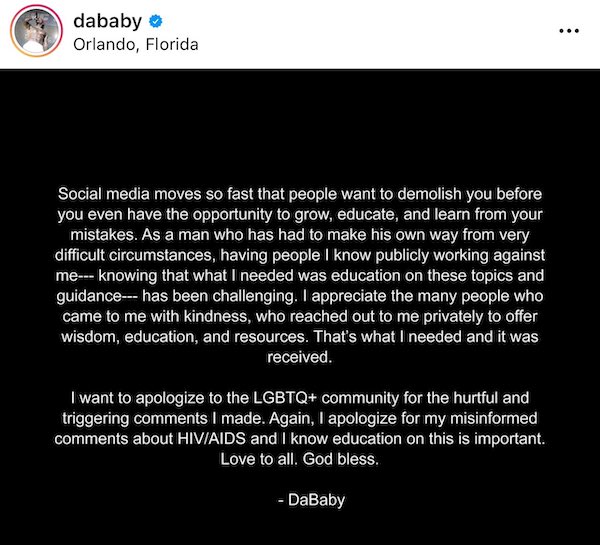 On Monday, it was announced that DaBaby won’t be a part of the New York Governors Ball for their forthcoming fall festival in September.

The rapper’s loss of income is spurred by his previous unapologetic attitude after making homophobic comments and several misleading statements about HIV/Aids at the Rolling Loud Miami festival held in Miami last week.

“Founders Entertainment does not and will not tolerate hate or discrimination of any kind,” the Governors Ball tweet read. “We welcome and celebrate the diverse communities that make New York City the greatest city in the world. Thank you to the fans who continue to speak up for what is right. Along with you, we will continue to use our platform for good.”

Meanwhile, DaBaby has been silent, but he has tried to play off the developments. On Monday morning after the announcement, he shared a video of himself that showed him listening to music supposedly unbothered while in his car.

In previous days the “Rockstar” rapper added fuel to the fire when he went off on Instagram with more derogatory statements as he tried to clarify that his comments were not directed at his LGBT+ fans because they are not “nasty” or “junkies.”

He eventually apologized on July 27. “Anybody who done ever been effected by AIDS/HIV y’all got the right to be upset, what I said was insensitive even though I have no intentions on offending anybody. So my apologies.”