The DaBaby hate train is apparently taking on more passengers, with legendary hip-hop drummer Questlove stepping in line to condemn the rapper’s Anti-gay/Anti-HIV comments shared during his Rolling Loud performance.

The past few days have been littered with DaBaby hate as he experiences a tough fallout due to his statements. So far, he has lost out on his BoohooMAN deal, been cut from the lineup at UK’s Parklife Festival, and has fans desperately begging to have him removed from Dua Lipa’s track “Levitating.” Even Madonna, Elton John, and Chris Brown have chimed in, speaking out against him.

DaBaby did have a few parties on his side, as T.I. and Boosie shared his sentiments, but by the looks of it, DaBaby is willing to take this fight on all by himself.

Determined not to go down without a fight, he fiercely clapped back at the 50-year-old frontman for The Roots, insinuating that Quest is using the LBQTQS+ community to shine some light on his career.

Questlove joined in on the DaBaby saga when he shared an image of a hypothetical lineup for his Summer Of Soul event. DaBaby’s name had a red line drawn through it, which signified him being cut from the roster. Quest used the caption to elaborate on his decision and to speak out about DaBaby’s incident, even though he has shied away from other matters in the past.

“Now I’m updating my list -because it’s 2021 & f**k the bullis**t. I’m especially not here for any savagery (if you’re lost: Google the idiocy of the crossed out). I’m not trine be all performative smurf & create a social flogging or start some click bait headlines. That’s missing the point. But right is right & his actions are wrong. Somebody Gotta say it: Homophobia/ Transphobia/ Xenophobia/ Misogyny/ Racism this should go w/o saying is morally wrong, not that fake hiding behind religion holier than thou morally wrong,” Questlove expressed.

“I had to say something. Again I’m not doing this for “what do you want a cookie bro w your ‘love ye one another’ posts?-black people already have a code about publicly criticizing so I’ll admit i was slow to do this because I mean he don’t know me from Adam. So this will prolly get marked as “old hater” territory. But man…..that sit was not cool at all,” he argued while peeling off other scandals and issues which have rocked a handful of black entertainers in the past.

He continued, “Huey Newton wisely stated in the early 70s that we as a people should NEVER go so low in life (with what we been through) that we start oppressing/ terrorizing the next man in the way we been terrorized for centuries… Y’all gonna learn that there are other human beings living in the space you are.”

“I was YO DREAM PERFORMER N**GA I don’t know you my boy. Might go mf bidness dawg @questlove,” DaBaby responded on TSR.

He doubled down on his stance on his IG Story with four biting posts.

“I ain’t even tryna be funny when i say …. i do NOT KNOW WHO DIS N**GA IS DAWG & do not care bout loosing you as a fan my boy lol @questlove. You or any other n**ga who wanna play follow the leader. This superstar you was a fan of is STAND UP n**ga, Yeen never seen one of these huh?” read the first image.

He continued, “These n**gas really think they gone influence people to stop f*ckin w/ the INFLUENCE. They go crazy bout what I say not y’all. I got da influence AND the nuts ni**a. Y’all ni**as cheerleaders.” 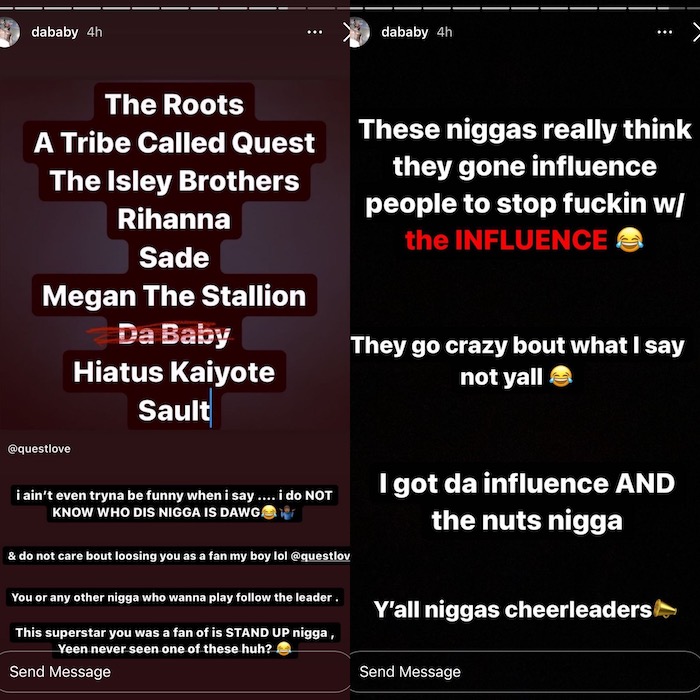 “Y’all extra a** ni**as tagging along playing on my top like I’m a ni**a you can bully or sumn. goin out y’all way creating art work & s*it tryna gain new fans off my situation cuz it’s QUIET for y’all ni**as. Ni**as better hit the studio or sumn,” read the third in the series of posts.

The calls for DaBaby’s cancellation continue to dominate social media for this week. However, Baby is clearly not sitting back and letting it happen without sharing his two cents on the matter.