The 29-year-old Atlanta rapper has huge aspirations to become the World’s Richest Black man as he shares how his perspective has been transformed during the pandemic. In a new Rolling Stone interview, Thug discloses his ambition which runs beyond music.

Young Thug also spoke about the impact of the pandemic and how he has changed and adjusted as the world over dealt with pandemic measures such as curfews, social distancing, and mask-wearing.

According to Thugger, he does not like being indoors, but he has made the most of it and turned towards gaming which he has developed a competitive edge for. He has taken a liking to Twitch.

“Prison is the worst thing, but being in the house not being able to do nothing—and you can die from air!?” he told the magazine.

When asked about his ambitions with reference to the likes of billionaire businessmen and rap moguls Jay-Z and Kanye West, Thug affirms that he didn’t just want to stay in music like the former rappers, but he wanted to branch out into other things.

“Yeah, I want to be the richest Black man in the world,” he responded.

The rapper is becoming known as one of the greats of this generation for his style and influence in hip hop. He is set to release the upcoming Punk album. The new album—is the solo studio follow-up to 2019’s So Much Fun and is set to be released on Oct. 15.

Among the most influential black men in the world are certainly Jay-Z and Kanye West, but the likes of Dr. Dre, 50 Cent, and others who have made their names outside of music are among the exceptions to those who focus solely on music. 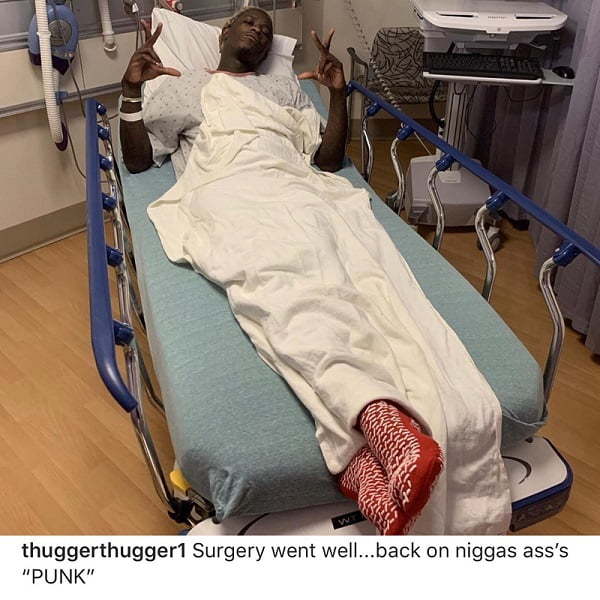 “Then later, when the ambulance came, I couldn’t get out of the bed. They had to get me out of the bed, basically. I felt like my whole body was numb and I couldn’t move. I went to the hospital and I had found out that I had liver and kidney failure. And I kinda had sorta passed away, like I kinda died.”

When asked what led to the medical scare, Thugger said, “drugs, don’t do drugs.”