Jayda Cheaves and Lil Baby have both reacted to a viral video showing Baby touching a mystery female in the club.

Last weekend, Atlanta-based rapper Lil Baby gained the attention of quite a few nightclub patrons and social media users after he was seemingly recorded grabbing a young lady suggestively.

The tape surfaced over the weekend with Baby in a packed nightclub in Miami. In the video, you can see where the person recording the video zoomed in tightly on Baby’s upper body. A dark-haired girl is pulled into the shot, and Baby is seen with his hands on her shoulders and his fingers resting along her collarbone and neck. The tape appeared to be too sensual, in the opinion of most social media users.

The video quickly made its rounds on social media networks. It was featured on the entertainment blog @its_onsite’s Instagram page, where it amassed over 250,000 views within a matter of hours. The video captioned, “#Clique What’s the caption?” gained the attention of Lil Baby himself.

The “We Paid” rapper wasted no time in clearing the air on the matter. He headed to the comment section under the post and wrote, “Let me live!! I was telling her to get (her) girls out of the section!! Y’all be creeps fr!! Tf are you recording me.”

Sadly, social media users are not buying his defense and had a field day in the comment section of the post, bashing Baby and calling him a cheater.

Jayda Cheaves posted a comment on a post from Justin Laboy that reads, “I was in a relationship so toxic that when we broke up people started congratulating me.”

Jayda response was, “Lol this the one.” 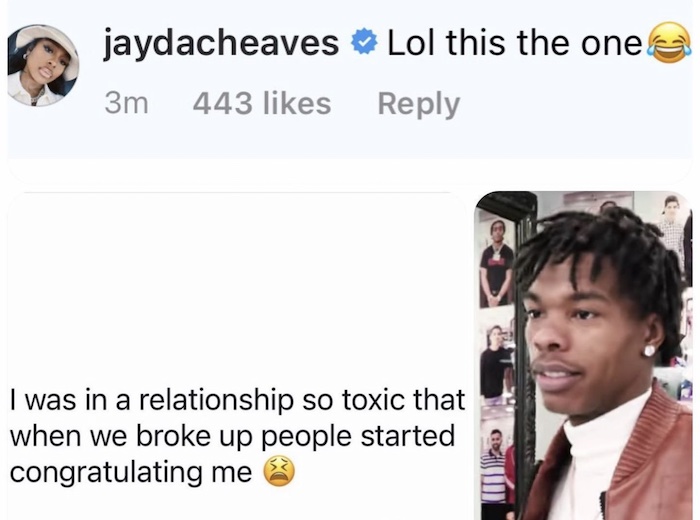 There are also a plethora of comments alleging that the woman in the video is none other than the friend of Lil Baby’s recently estranged girlfriend, Jayda Cheaves. The woman known by fans as Gissy has also been receiving backlash for the clip.

Jayda and Lil Baby allegedly called their romantic relationship quits earlier this year and decided that they would only stick to co-parenting their son Loyal Armani. Both Cheaves and Baby have stated explicitly in the recent past that they are not together, nor do they have any issues with each other.

Cheaves took to Twitter and wrote, “Stop trying to piece together this man’s interviews, songs etc because we’re no longer in a relationship. We’re also not beefing so plz stop with the negativity…the main focus right now is that we have a one year old to raise.”

Since then, there has been a string of mentions by each party, and they have been seen out and about together quite several times. Jayda had also vented her frustration that she has been in relationships her whole life since high school. Still, fans speculate that she will never fully break up with the rapper.

In speaking on Jayda, Baby previously expressed, “My baby mama rawer than a lot of you ni***s…Love you 4eva Wanda.”

Despite the on and off speculations of a relationship between them, it is beautiful to witness just how unconditional their love is.