Wack 100’s wish to hold Tekashi 6ix9ine accountable has come to fruition thanks to DJ Akademiks.

The notorious manager of The Game and Blueface has finally met face-to-face with 6ix9ine and DJ Akademiks. A photo showing the “Gooba” rapper posing beside DJ Akademiks and Wack 100 has emerged on social media as proof that the three met and a discussion went down.

A video clip showing the men preparing to capture a photo on what appears to be a balcony somewhere in Miami confirms that an interview was conducted as someone could be heard in the background commending Wack 100.

Wack 100 had announced last week that he was scheduled to interview 6inx9ine on Sunday, so speculations are that the interview was conducted yesterday (July 26) and should be released soon.

“I got a interview with 6ix9ine Sunday. So maybe Immo talk to 6ix9ine face to face, maybe we can make it happen,” Wack 100 said in a recent video.

The opinionated rap figure has shared, several times, his strong thoughts about Tekashi, maintaining that the “Tutu” rapper is no snitch but a ‘truth teller.’

Tekashi gained the title of a ‘snitch’ when he testified against his Nine Trey Gangsta Bloods gang in a deal with the authorities to get a shorter sentence. He was subsequently sentenced to 2 years in prison in 2019 but was released early from prison in April of 2020 due to health concerns about contracting Coronavirus as he has chronic asthma.

Due to Wack 100’s strong opinions about the situation in the past, it did not come as a surprise when he shared his desire to interview Tekashi 69 and made the request via DJ Akademiks.

“YO @akademiks I have some real questions for @6ix9ine. I need dude to look me in my eyes when I ask these questions. He has yet to be held accountable. Let me be the judge and the culture will be the jury,” he wrote on his Instagram story. 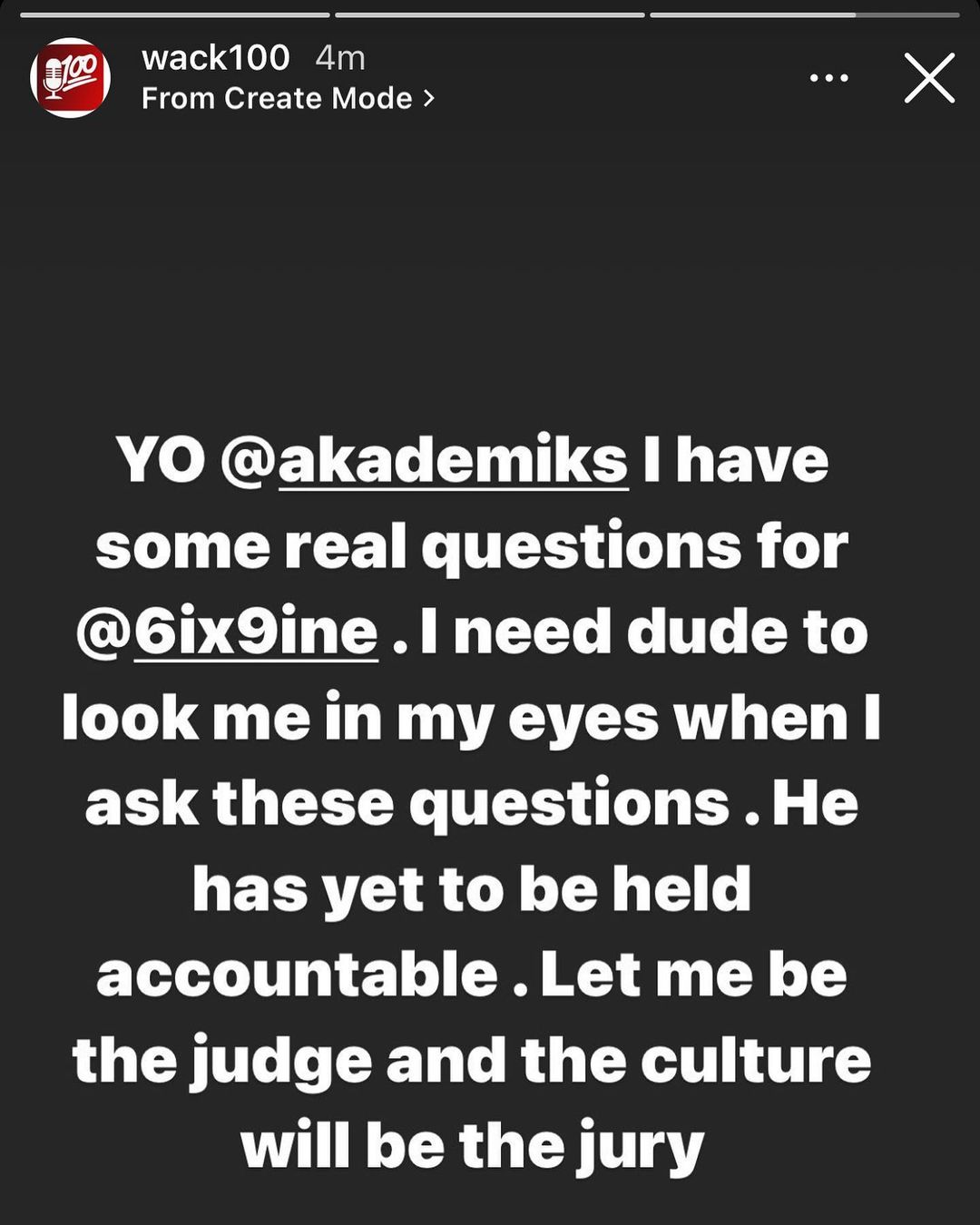 The rapper also shared his request in a caption on his Instagram page, “@akademiks call that man @6ix9ine and bring him to the table. We gotta kill the continued disrespect and I need to ask him face to face is he considers himself to be civilian or street. My opinion. Is what I think I need to know what the role really was! Was he initiated or was it a use thing on both sides. Was he a sheep in wolves clothing or was he attempting to be a wolf and went bad ? Put it together face to face ASAP.”

Based on the questions Wack was already asking, fans can be prepared for an eventful interview, with the revelation of details, perhaps the likes of which have never been shared before. There has been no official release date announced for the interview, but social media users anticipate all the details.

DJ Akademiks shared an image of the three of them together saying that it’s for his new podcast. “The first episode of my new Podcast is filmed,” Akademiks said. “Now being edited. Y’all better welcome me nicely to this podcast space. I came here for straight chaos and to be #1.”