Sean Paul has been making waves for way over two decades, but his fan base is largely based in North America and Europe, and with their help, the dancehall and reggae artist is getting much-needed recognition for his music.

On Friday, the dancehall legend shared the news, which he says came as a surprise to him. “SO MY PR REP TOLD ME I HAD AN INTERVIEW WIT [sic] #PANDORA BUT INSTEAD THEY SURPRISED ME WID THIS WICKED @andora’s #BILLIONAIRESCLUB AWARD,” Sean Paul said.

The Internet radio and streaming services Billionaires’ Club was started in 2018 to honor artists who meet the nine-figure mark. This also means that Sean Paul’s music will feature at the beginning of the genre station they are part of.

The “Gimme The Light” deejay is the first Caribbean-based talent to be inducted into the hall of fame.

“This is a nice surprise,” Sean Paul says in a video posted to his Instagram account. He apparently felt he was meeting an executive of Pandora at the AC Hotel in Kingston for an interview. 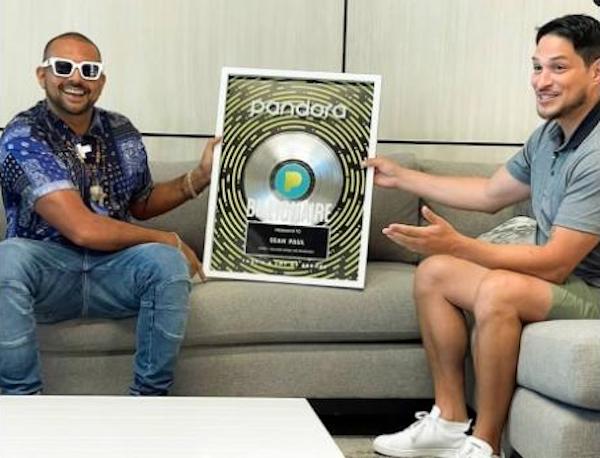 “As a teenager coming up, I thought dancehall was huge. I never saw any difference between Michael Jackson or Shabba – even though the numbers were different. I have always been proud of how innovative and fresh our sound is, that there are different styles we could put in our music. And being one of the persons championing the international image of it, and be in the same club as Janet Jackson, who was a pin-up on my wall back then, is very cool,” he is quoted in a Jamaica Gleaner article.

Meanwhile, the Reggae genre has a station on Pandora for almost 10 years. In 2012, additional complimentary stations were added, such as reggae rock, dancehall, and dub stations.

“There are recording artistes who understand how to increase their audience and that they have to, and we’re in a time where the world is accessible — they can make music here and still reach audiences from a wide cross-section of listeners. That’s a hurdle that some aspiring, and even established, acts [who are] still trying to reach those levels, need to get over. So, a lesson to younger artistes would be not to limit themselves, try different things and connect with artistes from other genres and innovate. Right now, Pandora continues to give our support to reggae and dancehall and, beyond that, to artistes like Sean Paul,” Herrera said.

Pandora is only available to music fans in the United States which shows the strength of Sean Paul’s fan base as he continues to make music his fans love while also staying relevant as the music game changes.