Entertainer L.A. Lewis is offering a reward for information on Clive “Lizard” Williams, in the hopes of “freeing” Vybz Kartel. Clive Williams was allegedly murdered by Vybz Kartel in 2011. The entertainer is currently behind bars serving a life sentence for the crime.

Earlier this year, Vybz Kartel, born Adidja Palmer, lost an appeal to throw out the murder conviction by the Supreme Court. His attorneys are currently preparing to make a final appeal at the nation’s highest court, the Privy Council in the UK.

Meanwhile, it seems L.A Lewis isn’t quite convinced that Lizard is dead, as is a number of Kartel’s fans. In a post on his Instagram page, Lewis posted a wanted poster featuring an image of the deceased Williams. The poster states that he is offering a reward of $2.5 million dollars for Williams. If an image or video is submitted then a partial reward of $50,000 is applicable as per the poster.

The poster further says that the reward is courtesy of L.A Lewis, the Seven Star General, while claiming that Lizard was last seen in Ocho Rios in January 2014. He asked persons with information to reach out to the police, to call 398-5710 or send an email to trillionairerecords@gmail.com.

L.A further captioned the post, “I am paying dis out my packet so @vybzkartel aka werl bass can be free. 7777777” 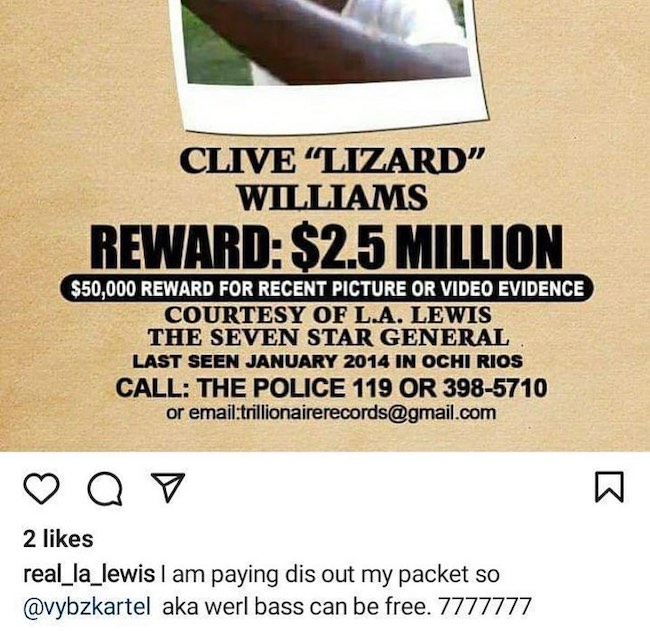 Fans had a field day in the comment section, with many of them taking the post as a joke.

One IG user said, “I could be having the worst day as soon as the Queens grandson post my day change I love this dude he tickles me lol,” while another wrote, “777….him deh pon a island a chill with 2pac n biggie.”

A third user commented, “Him dead , chopped up fine fine,” referencing one of the alleged voice notes used to convict Vybz Kartel in the infamous murder case.

At this point, there has been no response from Vybz Kartel’s official account which was tagged in the post by L.A.

This is the second time that Lewis has posted a reward seeking to get information on the deceased Williams in a bid to “free” Kartel. Back in 2014 he claimed Lizard was seen in Ocho Rios and offered a $1.6 million reward for his capture.