Young M.A has reportedly checked herself into rehab as she is seemingly battling an unspecified addiction.

The 29-year-old rapper reportedly told fans in an Instagram post, “MAB I’ll be back….boutta lose this addiction…omw to rehab.” Young M.A has since deleted her statement from her IG, but she assured her fans that she will be back. But, the “BIG” rapper soon after took to Twitter to share a prayer seeking comfort.

“Loving God, I pray that you will comfort me in my suffering, lend skill to the hands of my healers, and bless the means used for my cure,” she wrote. “Give me such confidence in the power of your grace, that even when?I am afraid, I may put my whole trust in you,” she wrote.

Young M.A’s short, stirring prayer has sent shock waves throughout the rap community, who were definitely not aware that the rapper was suffering in silence, especially not with an addiction.

Loving God, I pray that you will comfort me in my suffering, lend skill to the hands of my healers, and bless the means used for my cure. Give me such confidence in the power of your grace, that even when I am afraid, I may put my whole trust in you

The rap community and those within the music industry as a whole, as well her loving fans, are commending the rapper on her actions. They praise the “Ooouuu” rapper for realizing that something is wrong and admire her for making the decision to fix it with professional help. They are also sending best of wishes to M.A during this time.

“Get well soon love,” one person commented. Another added, “Really shows you don’t know what people go thru personally,” while another commended, “She did something alot of people wouldn’t.”

While it has not been revealed what the rapper is addicted to, it is not unusual for a popular hip-hop star to face addiction issues. Over the years, fans and followers have witnessed the detriment of some of the most prominent stars, due to issues of addiction, especially to drugs and alcohol. 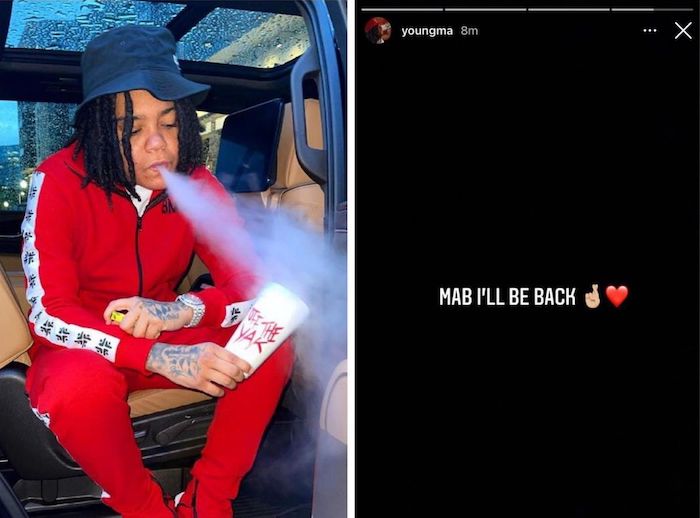 One of the latest rap legends to have passed from drug overdose, DMX, made it known that he was fighting a battle every single day to stay clean, but sadly the battle was lost, and the rapper died in April. Other popular stars who have died due to drug or alcohol abuse include Amy Winehouse, Prince, Lil Peep, Juice WRLD, Pimp C, Chris Kelly, and much more.

While addiction has far-reaching consequences that cannot be denied, it is hard to understand what any addict may be going through as they try to fight their way to a happy life without the use of substances.