Michael B. Jordan took to his social media account to apologize for the use of the word, which caused a furor among Trinbagonians as J’Ouvert is a significant part of their carnival culture.

The famed actor has been under fire from West Indians, particularly Trinidadians, for branding his rum J’Ouvert Rum. Caribbean folks at home and in the diaspora felt it’s a blatant case of cultural appropriation and demanded that he changed the name of the alcoholic beverage which itself is also synonymous with West Indian culture.

In posts on his social media account on Tuesday night, Michael B. Jordan apologized for the use of the name and said that he’s in the process of renaming it.

“I just wanna say on behalf of myself & my partners, our intention was never to offend or hurt a culture [we love & respect] & hoped to celebrate & shine a positive light on,” he said.

The Black Panther actor added that he has heard the complaints and will be acting to make changes to the brand, which will still be launched.

“Last few days has been a lot of listening. A lot of learning & engaging in countless community conversations… we hear you. I hear you & want to be clear that we are in the process of renaming. We sincerely apologize & look forward to introducing a brand we can all be proud of,” he posted on his Instagram stories.

His apology comes after Nicki Minaj, who herself being Trinidadian, suggested that he changed the name and move on. 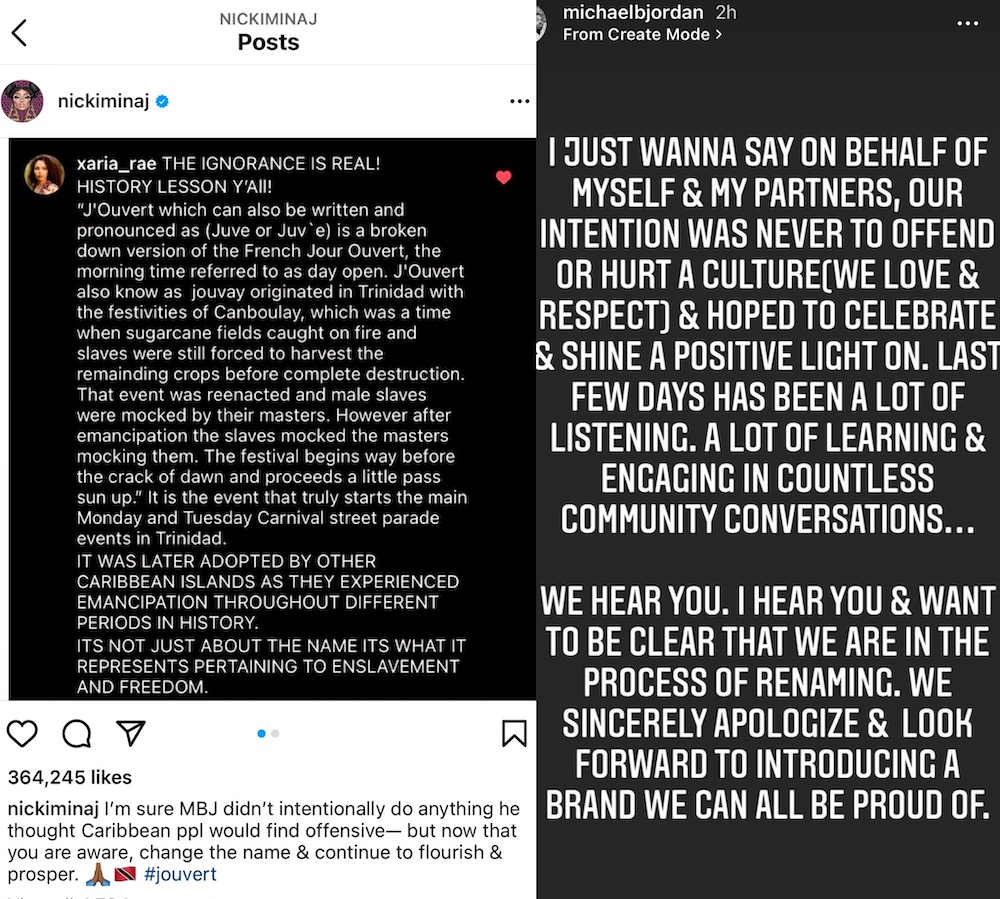 Nicki Minaj reposted on her Instagram account a screenshot from an internet user who described the long and complex history of J’Ouvert, which goes back to slavery days in the twin-island republic over three hundred years ago.

According to her, she believes that Jordan did not intentionally commit the offending action.

“I’m sure MBJ didn’t intentionally do anything he thought Caribbean ppl would find offensive- but now that you are aware, change the name & continue to flourish & prosper,” she said.

Michael B. Jordan was accused on Sunday of cultural appropriation as he sought to have the word ‘J’Ouvert” trademarked for his rum. However, Trinbagonians were furious at the thought of a stranger who probably never even experienced the event claiming the name and profiting from it.

Many online were quick to forgive the actor following his apology.