In some sad news, Tarrus Riley has revealed that his sister Jaffa Joy Riley has passed away. The “Lighter Singer” took to Instagram to share his grief with his fans and followers. “Love Salute from My Beloved Likkle Sister Jaffa Joy Riley/Douglas 4eva in Our Hearts,” he posted on Tuesday (June 15).

It is a trying time for the artist whose Instagram account was recently hacked. In his Instagram stories, Tarrus Riley said, “Honestly it is the worst time in my family life. little sister just passed away and we are going through it. It ruff. Thank you all for the well wishes and support.” He also shared his frustration about the hacking situation.

“Sum b&$*boklaat wicked ppl try to take away my Instagram looks like we up and running again, thanks for rocking with me and always supporting the vibes,” he added. Riley also shared some pics of his sister on his story as he paid homage to her. He did not share her cause of death and is clearly affected by her passing. 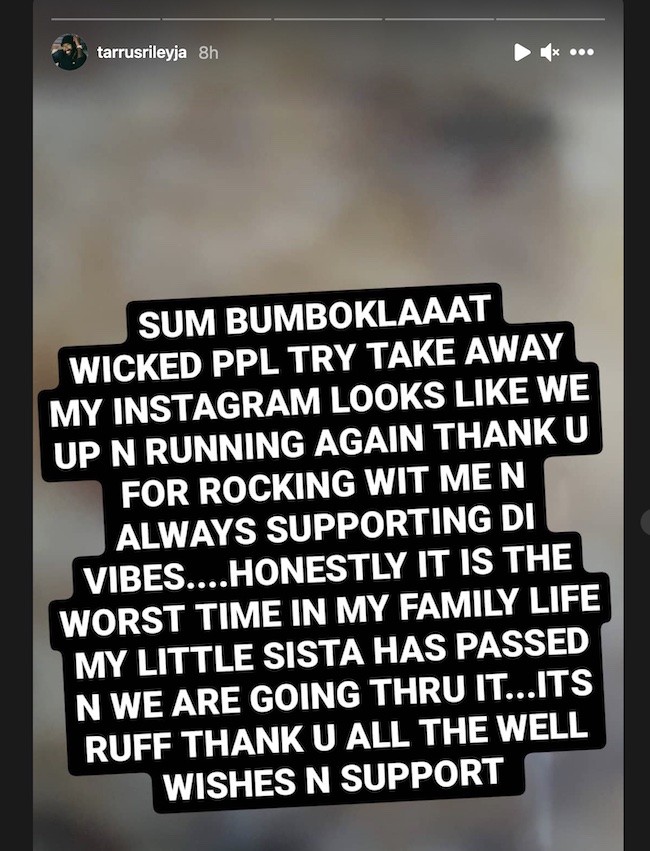 Tarrus Riley fans were there for him and expressed their condolences while sending him some words of comfort. Some of his colleagues, including Romeich and Chino McGregor, sent their support using the heart emoji.

Other fans also chimed in, “RIP Queen! My condolences to you and the entire family bro,” this one said, another added, “Condolences my brother my (heart) hurts for you..hugs,Love prayers Stay Strong,” and another fan said, “My Deepest condolences my brother you have Two Angels Now watching over you I have my mom & my Dad as well.”

The second angel the fan was referring to was Riley’s father, the late reggae veteran Jimmy Riley. In March, on the fifth anniversary of his father’s death, he opened up on Instagram about how much he missed him, describing it as one of the saddest days of his life.

“On this day March 24 2016 I watched my Father breathe his last breath The Saddest Day in My Life and One of the Darkest places I’ve ever been in my soul to this day,” he posted at the time.

Riley added: “I give thanks today for the lessons He taught me throughout life. Especially during his last days on earth..he made it his duty to Remind me BE BRAVE..BE STRONG…Have Fun..Follow ur Heart… DON’T OVER THINK..Leave Space for GOOD/BLESSINGS to walk in ur LIFE. n Live every moment like a WINNER..cause when it’s game over it’s GAME OVER.”

We at Urban Islandz send our sincerest condolences to Tarrus Riley and his family during this trying time.