Nicki Minaj apologize to T-Pain for ghosting him back in 2007 after he hit her up for a collaboration.

According to T-Pain, he and Nicki Minaj were to work on a collaboration together in 2007, but after making efforts to meet up with her, she disappeared on him. The Auto-Tune singer says it hurt him when he got onto her, and she curved him, saying that she too was a busy artist working.

In an interview with the 85 South Show, he says he felt like he was in love with her, and her actions hurt his feelings where he detailed the one time that Nicki Minaj had him in his feelings.

“We was about to work together and she stopped responding and I was like, ‘Nick, let me know what’s going on,'” he said. “She was like, ‘Hey, I’m an artist too and I’m working on my sh*t so ya know. Baby, chill.’ And I was like, ‘Oh… My heart.'”, while laughing.

Laughing it off, he said he might have been in love with her. T-Pain added that there was nothing malicious about her actions as he understood she was working to build her career.

By 2007, Nicki Minaj was still an underground artist trying to make it big. However, Nicki Minaj hopped into the Shade Room to respond and apologize to T-Pain when she got wind of the story. Although Nicki said she didn’t remember the story, she said it sounded like something she did.

“Omg what was I thinking? He was already a rlly big artist. I was still underground. Chileeee I used to b buggin yo,” her comment said, admitting that she already felt pressure from everyone to deliver. “My bad babe, all love. I have nthn but respect for your talent and thank you & Kanye for clearing ‘Go Hard’ for Beam Me Up Scotty last month.” 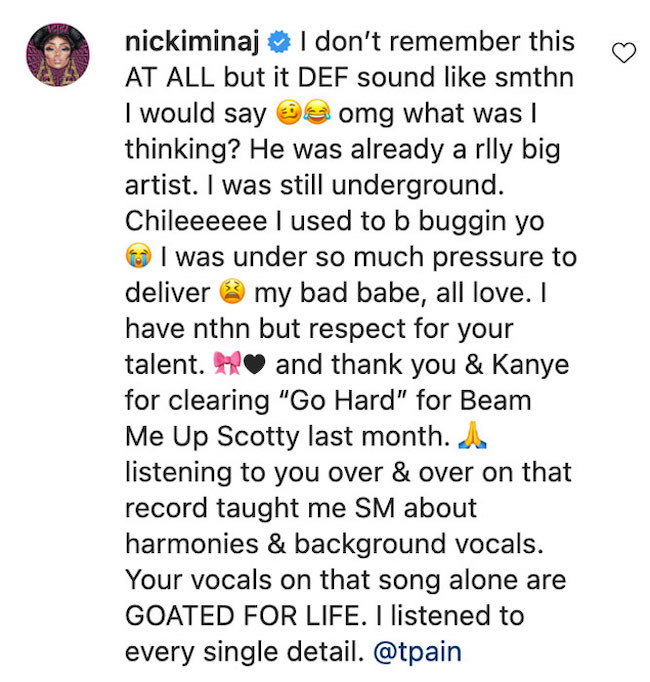 Nicki also shared that she loved having T-Pain’s vocals on her record.

“Listening to you over & over on that record taught me [so much] about harmonies & background vocals,” she continued. “Your vocals on that song alone are GOATED FOR LIFE. I listened to every single detail @tpain.”

Meanwhile, fans were quick to call for a collab to come to life as they said it’s not too late to jump into the studio.