Jada Kingdom has shared pictures and videos of a wound that was inflicted by a small object in a hotel.

The Dancehall deejay, who is staying at an unidentified hotel in America, took to her story to show her bleeding hallux and went on to show the small iron object on the floor that caused the injury. She also posted numerous broken heart emojis.

Captioning the picture, a frustrated and angry Jada Kingdom wrote, “Door Stopper. Why the f*k do they have this thick sharp iron thing sticking out the floor like that? Not even a piece of rubber over it?”

In a subsequent video, Jada Kingdom said, “Mi deh yah so a look pon dis an mi a wonder why….this big tough supm like a hulk dem prepare it fah. This big fridge….Mi and dem watch..” she threatened.

Sharing her progress, Jada went on to post her bandaged toe, accompanied by crying emojis. But, while the bandage would have been able to keep the wound clean, the “Love Situations” was still in pain as she said she could not sleep due to the injury. The “Win” artiste shared a picture of her wound bleeding through the bandage. 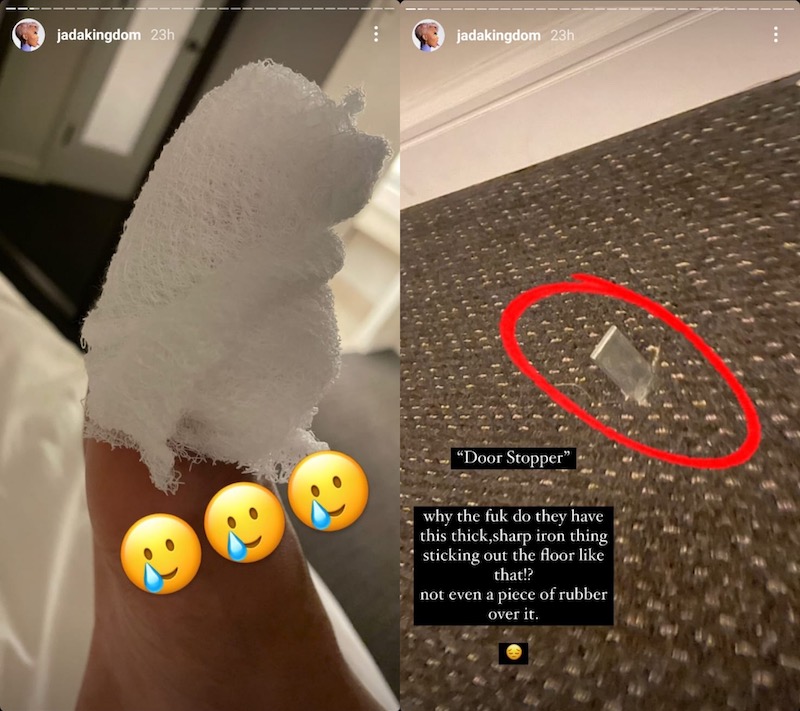 “Cyah sleep ah raw*e!” she captioned. Perhaps annoyed at the inconvenience, Jada posted a picture of pain tablets, Tylenol and Advil, to ease her discomfort.

But it did not end there. Jada later shared that she left the room and returned to see the object covered with a black casing.

Although Jada Kingdom had threatened in the videos, it does not appear that a major deal was created from the issue. The artiste did not disclose whether or not she had spoken with management or if there was any other outcome. She subsequently went and performed at her event in Philly, rocking knee-high boots over the injury.

The name of the hotel has also not been disclosed.